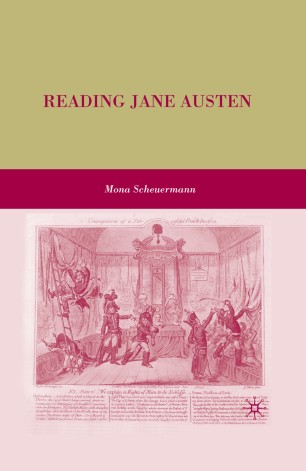 Reading Jane Austenexplores Mansfield Park, Pride and Prejudice, Emma, and Persuasion against their historical and cultural backdrop to show precisely how Jane Austen sets out the core themes of British morality in her novels. Austen s period was arguably the most socially and politically tumultuous in England s history, and by replacing the novels in this remarkable era, Scheuermann sharply defines Austen s view of the social contract.

MONA SCHEUERMANN Professor of English at Oakton Community College, USA. She has held visiting professorships at the University of Hamburg, the Free University of Berlin and the University of Berne. She is the author of Social Protest in the Eighteenth-Century English Novel; Her Bread to Earn: Women, Money, and Society from Defoe to Austen; and In Praise of Poverty.

"It is probably a sign of the times that contemporary readers can find so much to enjoy in a discussion of the moral values at work in Austen s world. Nothing is more difficult to convey in a college classroom today than the concept of decorum with all its ramifications, social to aesthetic. Yet students gravitate toward the concept and desperately want to understand it. Mona Scheuermann has performed a great service to teachers and students alike in this study of Austen s moral compass, her abiding commitment to right relations amongst members of her society." - Eighteenth-Century Life

"Scheuermann does not have a political agenda; Austen is not, for her, a feminist novelist, nor is she a failed feminist novelist. By setting Austen s novels in their own remarkable era, Scheuermann discovers a writer who, far from merely working that small piece of ivory, intimately faces the most profoundconcerns of late eighteenth- and early nineteenth-century England." - Maximillian Novak, Distinguished Professor of English and Comparative Literature, UCLA

"Repeatedly hijacked by assorted critics with contradictory agendas, Jane Austen s writings have long been held hostage to a rag-tag band of ideologies, methodologies, and plain old ambitions.Now, Austen s novels have been liberated . . .Scheuermann returns to us a Jane Austen that we all knew (or at leasthoped) existed: an Austen with robust conceptions of the good and decent life, a no-nonsense Austen who makes clear judgments about the merit of ideas, people, literature, and the arts." - Kevin L. Cope, Professor, Department of English, Louisiana State University

"Scheuermann offers a reading of a conservative Jane Austen that is profound in its simplicity, and sophisticated in its refusal to be taken in by the various jargons of recent criticism . . .Scheuermann makes a strong argument for acknowledging that Austen s values are often very different from our own, no matter how violently we twist and torment her texts to make her one of us. In doing so, she demonstrates the full clarity of Austen s ethical vision and the very good reasons why - as a check to our own certainties - it is always timely and instructive to reread her novels." - Melvyn New, Professor of English, Emeritus, University of Florida