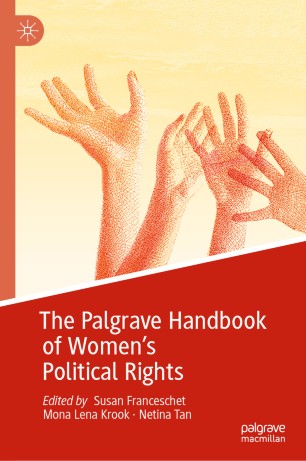 This Palgrave Handbook provides a definitive account of women’s political rights across all major regions of the world, focusing both on women’s right to vote and women’s right to run for political office. This dual focus makes this the first book to combine historical overviews of debates about enfranchising women alongside analyses of more contemporary efforts to increase women’s political representation around the globe. Chapter authors map and assess the impact of these groundbreaking reforms, providing insight into these dynamics in a wide array of countries where women’s suffrage and representation have taken different paths and led to varying degrees of transformation. On the eve of many countries celebrating a century of women’s suffrage, as well as record numbers of women elected and appointed to political office, this timely volume offers an important introduction to ongoing developments related to women’s political empowerment worldwide. It will be of interest to students and scholars across the fields of gender and politics, women’s studies, history and sociology.

Susan Franceschet is Professor of Political Science at the University of Calgary, Canada. She is the author of Women and Politics in Chile (2005) and co-editor of The Impact of Gender Quotas (with M. L. Krook and J. M. Piscopo, 2012). She has published extensively on women’s political representation and political institutions in comparative perspective.

Mona Lena Krook is Professor of Political Science at Rutgers University, USA. She is the author of Quotas for Women in Politics (2009), as well as numerous articles on gender quotas, women's political representation, and violence against women in politics.

Netina Tan is Assistant Professor of Political Science at McMaster University, Canada. Her dissertation, Hegemonic Party Rule in Singapore and Taiwan, won the 2011 Vincent Lemieux Prize for the best Ph.D. thesis in Canada. She has authored numerous articles on authoritarian resilience and representation of women and ethnic minorities in Asia.