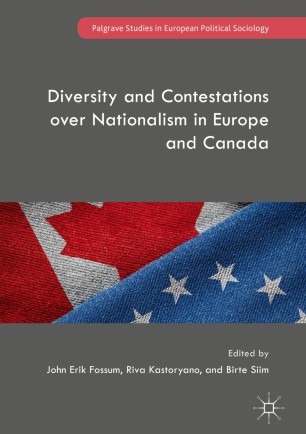 Diversity and Contestations over Nationalism in Europe and Canada

This edited collection considers how transformations in contemporary societies have raised questions surrounding our sense of community and belonging, alongside our management of increased diversity.

Diversity and Contestations over Nationalism in Europe and Canada includes contributions that consider the rise in regional nationalism and a greater willingness to recognise that many states are multinational. It critically explores the effects of altered patterns of immigration and emigration, including whether they give rise to (or re-invigorate) transnational or border-crossing forms of nationalism.

The book also identifies the patterns of national transformation, especially in Europe, which we see coupled with significant nationalist reactions by populists as well as extreme right-wing movements and parties. This multidisciplinary collection of works will be a useful resource forresearchers and students of political sociology in Europe and Canada, particularly within the contexts of immigration, multiculturalism and globalization.

John Erik Fossum is Professor at the ARENA Center for European Studies at the University of Oslo, Norway

Birte Siim is a Professor in the Department of Culture and Global Studies at Aalborg University, Denmark