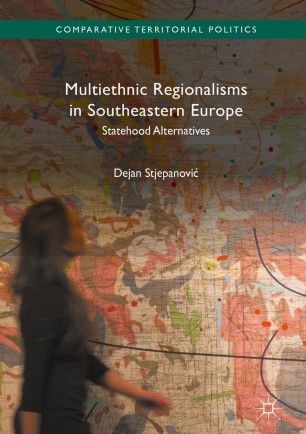 This book is based on a comparative study of regionalisms in Croatia’s regions of Dalmatia and Istria as well as Serbia’s Vojvodina. The monograph’s main focus is on regionalist political party strategies since 1990, and within that, each case study considers history and historiography, inter-group relations, economics, and region-building. The analysis demonstrates that many of the common assumptions about the causal determinants of territorial autonomy projects and outcomes, as well as about a teleological and unidirectional path from regionalism to nationalism, do not stand up to scrutiny. The author introduces original concepts such as plurinational, multinational and sectional regionalism to theories of nationalism and territorial politics. This book will appeal to scholars and upper-level students interested in territorial politics, federalism, nationalism and comparative politics.

Dejan Stjepanović is Lecturer in Politics at the University of Dundee, UK. He holds a PhD in Political and Social Sciences from the European University Institute, Florence, Italy. His main postdoctoral affiliations included the University of Edinburgh, University College Dublin and the Université catholique de Louvain.  He has published on territorial politics, nationalism and citizenship and taught and designed modules on regionalism, nationalism, democratisation, security studies, comparative politics and international relations.

“In much of Central-Europe federalism and regionalism are associated with secessionism. This is especially the case in those countries which emerged out of the former Yugoslavia. Stjepanović's book demonstrates that regionalist sentiments or aspirations do not necessarily generate secessionist outcomes. Furthermore, his work explains why notwithstanding comparable starting positions in the 1990s, different forms of regionalism emerged in Istria, Vojvodina and Dalmatia. This book adds to our understanding and conceptualization of sub-state regionalism and to the dynamics of decentralization in Central and Eastern Europe more generally.” (Wilfried Swenden, University of Edinburgh, UK and Managing Editor, Regional and Federal Studies)

“This study makes an important and timely contribution to the scholarship on regionalism, nationalism, and Southeastern Europe. The analysis weds a thoughtful overview of the relevant theoretical literature to a rich empirical comparison of regionalist movements that developed in Istria, Dalmatia, and Vojvodina in the wake of Yugoslavia's dissolution. In evaluating the success of such projects, Stjepanović highlights the key roles played by political parties, ethnic minorities, and both historical legacies and understandings. The book provides an invaluable typology of regionalisms and a nuanced assessment of territorial politics that offer alternatives to statehood. An urgent read in this era of renewed nationalism.” (Pamela Ballinger, University of Michigan, USA)