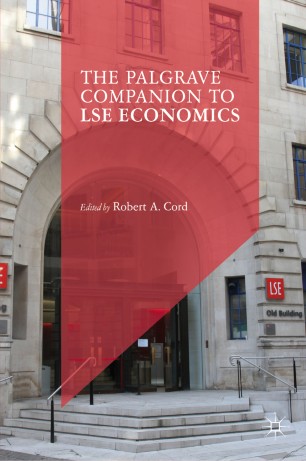 The Palgrave Companion to LSE Economics

The London School of Economics (LSE) has been and continues to be one of the most important global centres for economics. With six chapters on themes in LSE economics and 29 chapters on the lives and work of LSE economists, this volume shows how economics became established at the School, how it produced some of the world’s best-known economists, including Lionel Robbins and Bill Phillips, plus Nobel Prize winners, such as Friedrich Hayek, John Hicks and Christopher Pissarides, and how it remains a global force for the very best in teaching and research in economics. With original contributions from a stellar cast, this volume provides economists – especially those interested in macroeconomics and the history of economic thought – with the first in-depth analysis of LSE economics.

Robert A. Cord holds a PhD from the University of Cambridge, and his areas of interest include the history of economic thought and, within this, the history of macroeconomics. His publications include Reinterpreting the Keynesian Revolution (2012), The Palgrave Companion to Cambridge Economics (2017) and Milton Friedman: Contributions to Economics and Public Policy (2016).