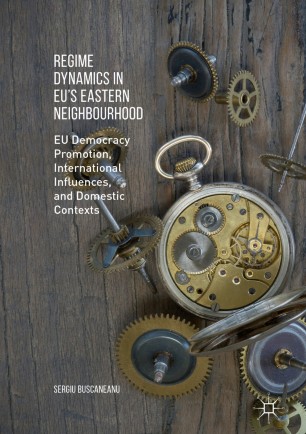 This book examines the effectiveness and consistency of EU democracy promotion in its Eastern neighbourhood between 1991 and 2014. It concludes that the EU’s democratization role in this region was, not surprisingly, weak within this time period. However, this weak role only took shape under four domestic and transnational conditions: (a) a higher cost-benefit balance of rule transfer, (b) a lower structural difficulty a given country would need to overcome on its way towards a democratic regime, (c) increased levels of authority distribution across branches of power, and (d) a higher extent of democratic diffusion resulting from regional interactions. In those countries where these domestic and transnational conditions were present, as in Moldova, Ukraine, and Georgia, the EU’s democratizing influence was in causal terms only the tip of the iceberg. Most variation in regime dynamics remains to be explained by domestic and transnational contexts.

“Regime Dynamics in the EU’s Eastern Neighbourhood is a timely and well-researched study of the European Union’s efforts to promote democracy in Ukraine, Moldova, Georgia, Armenia and Azerbaijan. Sergiu Buscaneanu’s thoughtful analysis of the interplay of domestic and international factors in a multi-method design finds that the EU can have a certain influence on democratisation, but its role is secondary to, and conditioned by, other domestic and transnational factors.” (Ulrich Sedelmeier, Associate Professor in the International Relations of Europe, London School of Economics and Political Science, UK)

“Through a multi-method, holistic approach, Sergiu Buscaneanu evaluates the effects of the European Union's democracy-promotion efforts across five countries in its eastern neighborhood. He finds that EU democracy-promotion exerted only a limited effect on regime trajectories, and only under certain conditions. Buscaneanu's systematic treatment of the domestic, transnational, and international influences on democratization will be of broad interest to scholars and policy-makers alike.” (Mark R. Beissinger, Henry W. Putnam Professor of Politics, Princeton University, USA)

“This is a very rich, well structured, and empirically insightful book. It addresses the old question whether democratization of political regimes can be promoted from the outside or whether it is an exclusive domestic affair. Addressing this general question with the concrete examples of the impact of EU democracy promotion and international factors on East European polities, the author shows that it is above all the ‘diffusion’ of ideas and international support, which mattered most in partially democratizing the East.” (Wolfgang Merkel, Professor of Comparative Political Science and Democracy Research, Humboldt University of Berlin, Germany)