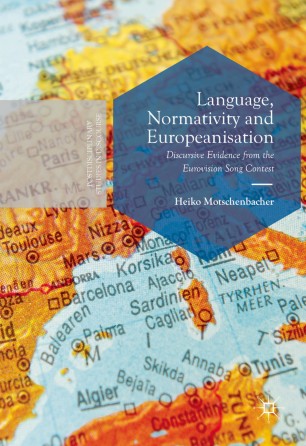 Part of the Postdisciplinary Studies in Discourse book series (PSDS)

This book focuses on linguistic practices of identity construction in a popular culture media context, the Eurovision Song Contest. Subscribing to a normativity-based approach to critical discourse analysis, it studies Europeanisation as it surfaces at the discursive interface of European, national and sexual identities in Eurovision lyrics and performances. Research in critical discourse analysis that deals with Europeanisation, or the discursive work involved in European identity formation, has so far mainly studied data from EU political contexts that illustrate a top-down approach to what Europeanness means. The present book complements this earlier research in several ways, focusing on the linguistic construction of identities, and its interrelation with non-linguistic modes of signification in the Eurovision Song Contest. Discursive mechanisms that prove to be central for the normative shifts of Europeanisation in the given context are de-essentialisation, inclusion, camp, crossing and languaging.
Heiko Motschenbacher is a lecturer at Goethe-University, Frankfurt am Main, Germany, where he completed his PhD and post-doc research. He has held temporary professorships of English Linguistics at universities in Bayreuth, Siegen, Braunschweig and Mainz. He is founder and co-editor of the Journal of Language and Sexuality (with William L. Leap). Among his recent publications are the monographs Language, Gender and Sexual Identity: Poststructuralist Perspectives (2010), An Interdisciplinary Bibliography on Language, Gender and Sexuality (2000–2011) (2012), and New Perspectives on English as a European Lingua Franca (2013). He has co-edited a special issue of the journal Discourse & Society on Queer Linguistic Approaches to Discourse (2013, with Martin Stegu) and the fourth volume of Gender Across Languages: The Linguistic Representation of Women and Men (2015, with Marlis Hellinger).