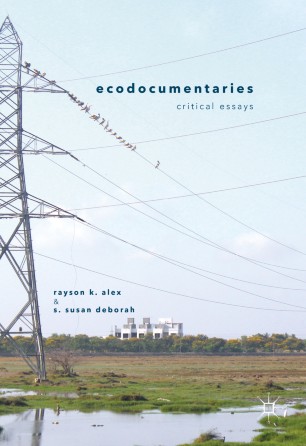 This book features ten critical essays on ecodocumentaries written by eminent scholars from India, USA, Ireland, Finland and Turkey in the area of ecocinema studies. Situating social documentaries with explicit ecological form and content, the volume takes relational positions on political, cultural and conservational aspects of natures and cultures in various cultural contexts. Documentaries themed around issues such as electronic waste, animal rights, land ethics, pollution of river, land grabbing, development and exotic plants are some of the topics ecocritiqued in this volume.

Rayson K. Alex, Ph.D., is Assistant Professor at the Department of Humanities and Social Sciences at Birla Institute of Technology and Sciences Pilani, K.K. Birla Goa Campus, Goa, West India. He is one of the editors of Essays in Ecocriticism (2007) and Culture and Media: Ecocritical Explorations (2014). Along with S. Susan Deborah, K. Samuel Moses and Sachindev P.S., he founded ‘The Ecomedia Team’ in 2005 which gradually grew into tiNai Ecofilm Festival (www.teff.in), an international ecofilm festival dedicated to ecodocumentaries. His academic interests are in the areas of indigenous studies, ecoindigeneity, ecocinema studies and ecocriticism.
S. Susan Deborah, Ph.D., is Assistant Professor in the Department of English, M. E. S. College of Arts & Commerce, Goa, West India. She is one of the editors of Culture and Media: Ecocritical Explorations (2014), the first volume in the area of ecocinema in India. She is the recipient (along with Rayson K. Alex) of ASLE-USA Media Subvention Grant, for creating an interactive video space for ecocinema scholarship. Her interests lie in food studies, ecomedia and ecocriticism.