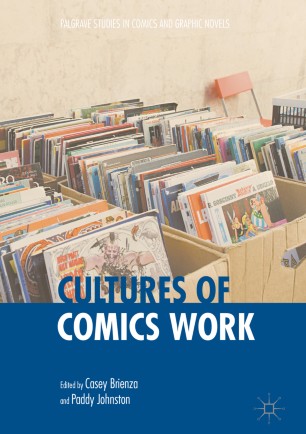 This anthology explores tensions between the individualistic artistic ideals and the collective industrial realities of contemporary cultural production with eighteen all-new chapters presenting pioneering empirical research on the complexities and controversies of comics work.

Art Spiegelman. Alan Moore. Osamu Tezuka. Neil Gaiman. Names such as these have become synonymous with the medium of comics. Meanwhile, the large numbers of people without whose collective action no comic book would ever exist in the first place are routinely overlooked. Cultures of Comics Work unveils this hidden, global industrial labor of writers, illustrators, graphic designers, letterers, editors, printers, typesetters, publicists, publishers, distributors, translators, retailers, and countless others both directly and indirectly involved in the creative production of what is commonly thought of as the comic book. Drawing upon diverse theoretical and methodological perspectives, an international and interdisciplinary cohort of cutting-edge researchers and practitioners intervenes in debates about cultural work and paves innovative directions for comics scholarship.

Casey Brienza is Lecturer in the Department of Sociology and the Centre for Culture and the Creative Industries at City University London, UK. She is author of Manga in America: Transnational Book Publishing and the Domestication of Japanese Comics and editor of Global Manga: “Japanese” Comics without Japan?.

Paddy Johnston is a comics scholar, cartoonist, and writer, currently working as a Doctoral Researcher in the English department at the University of Sussex, UK. He has published articles on comics in The Comics Grid, Comics Forum, and Networking Knowledge.