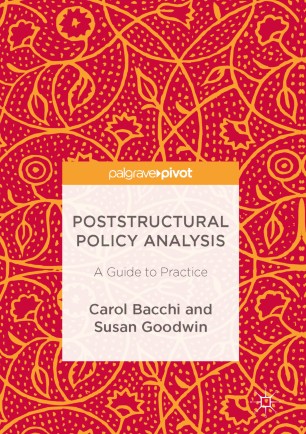 A Guide to Practice

This book offers a novel, refreshing and politically engaged way to think about public policy. Instead of treating policy as simply the government’s best efforts to address problems, it offers a way to question critically how policies produce “problems” as particular sorts of problems, with important political implications. Governing, it is argued, takes place through these problematizations. According to the authors, interrogating policies and policy proposals as problematizations involves asking questions about the assumptions they rely upon, how they have been made, what their effects are, as well as how they could be unmade. To enable this form of critical analysis, this book introduces an analytic strategy, the “What’s the Problem Represented to be?” (WPR) approach. It features examples of applications of the approach with topics as diverse as obesity, economic policy, migration, drug and alcohol policy, and gender equality to illustrate the growing popularity of this way of thinking and to provide clear and useful examples of poststructural policy analysis in practice.
Carol Bacchi is Professor Emerita of Politics at the University of Adelaide, Australia. Her work over the past forty years has encouraged rethinking of taken-for-granted truths about women’s history, equality policy and public policy generally. Major publications include: Same Difference: Feminism and Sexual Difference (1990), Women, Policy and Politics: The Construction of Policy Problems (1999) and Analysing Policy: What’s the Problem Represented to Be? (2009).
Susan Goodwin is Associate Professor of Policy Studies at the University of Sydney, Australia. Her research focuses on social policy and gender, and she contributes to policy processes at local, national and international levels. Recent publications include Markets, Rights and Power in Australian Social Policy (2015), Schools, Communities and Social Inclusion (2011) and Social Policy for Social Change (2010).