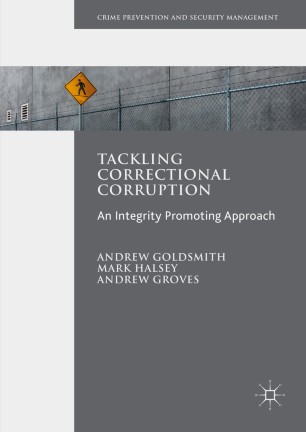 Corruption is a problem in prisons about which we hear very little, except when there is an escape from custody or other scandal that makes the media. The closed nature of correctional institutions has made the activities that go on within them less visible to the outside world. While some persons might be inclined to dismiss correctional corruption as an issue, this view ignores the scale of criminality and misconduct that can go on in prison and the impact it can have upon not just the good order of the prison or the rights of prisoners but on the prospects for successful reintegration of ex-prisoners into society.
This book is the first to examine the phenomenon in any detail or to suggest what might be done to reduce its incidence and the harms that can arise from it. Andrew Goldsmith, Mark Halsey and Andrew Groves argue that it is not enough to tackle corruption alone. Rather there should be a broader attempt to promote what the authors call ‘correctional integrity’.
Andrew Goldsmith is Strategic Professor of Criminology at Flinders University, Australia, and Director of the Centre for Crime Policy and Research. Previously he has held academic posts at the Australian National University, University of Wollongong and Monash University, Australia. His research interests include policing, new technologies, organized crime and corruption.

Mark Halsey is Professor of Criminology at the Centre for Crime Policy and Research, Flinders University, Australia. He currently holds a four year Australian Research Council Future Fellowship which explores the causes and consequences of intergenerational incarceration. Mark is the lead author of Young Offenders: Crime, Prison and Struggles for Desistance (Palgrave Macmillan, 2015).