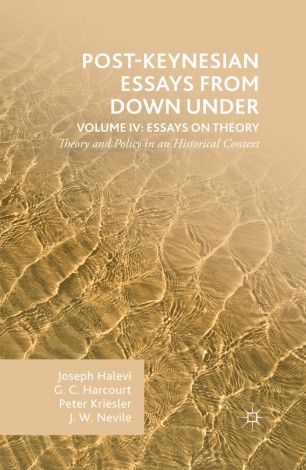 Post-Keynesian Essays from Down Under Volume IV: Essays on Theory

Joseph Halevi, G. C. Harcourt, Peter Kriesler and J. W. Nevile bring together a collection of their most influential papers on post-Keynesian thought. Their work stresses the importance of the underlying institutional framework, of the economy as a historical process and, therefore, of path determinacy. In addition, their essays suggest the ultimate goal of economics is as a tool to inform policy and make the world a better place, with better being defined by an overriding concern with social justice. Volume IV explores theory.

Joseph Halevi was born 1946 in Haifa, then British Palestine. An Alama Mater University of Rome La Sapienza, he began teaching economics at the New School of Social Research in New York and later at Rutgers University. He has a permanent appointment at the University of Sydney. He was Visiting Professor at the University of Connecticut and regularly in France at the Universities of Grenoble, Nice and Amiens. He has authored many books and contributed to the first edition of The New Palgrave Dictionary of Economics in 1987 and co-edited Beyond the Steady State with Macmillan in 1992, among others.

Peter Kriesler currently teaches in the School of Economics at the University of New South Wales. He also organizes the Annual Australian Society of Heterodox Economists Conference, which is now in its fourteenth year. Peter's main publications are in the areas of history of economic thought, heterodox economics, the Australian economy, labour economics, and economic perspectives on human rights.

J. W. Neville is Emeritus Professor at the University of New South Wales in Sydney, Australia. He has published extensively on fiscal policy, macroeconomic policy in general, economics and ethics, and the history of economic thought. He has served on a number of statutory authorities and government enquiries.

'The openness to new policy ideas in the wake of the crisis needs a different theoretical understanding of the economy from the prevailing mainstream. That such an alternative is available in post-Keynesian economics is evident from this impressive collection of essays from four leading Australian political economists. Joseph Halevi, Geoff Harcourt, Peter Kriesler and John Nevile bring together a selection of their contributions to post-Keynesian theory, built on the work of theoretical pioneers. While each of the four brings his own perspective, the collection displays an unusual degree of cohesion resulting from their shared influences and collaborations.'

Sheila Dow, Emeritus Professor of Economics at the University of Stirling, UK

'The essays in this volume exude the importance of economic theory and, in particular, the importance of a truly alternative theory that transcends patched-up amendments of orthodoxy. Uncoupling the theories of value and distribution from the straitjacket of marginal productivity theory and recognizing the limits of equilibrium theorizing (and the importance of path dependency) are but two important items on the agenda. The book could well be subtitled 'Theory Done Right'. Its contents demonstrate that as regards economic theory, there is much to be admired about, and much to be learned from, the view from Down Under.'

'A valuable collection to inspire some and remind others how little they know.'