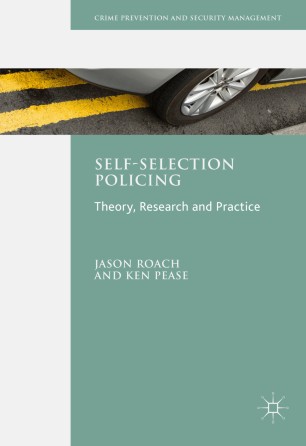 Self-Selection Policing introduces and explores an approach for crime control which seeks to identify active, serious offenders by attending to the minor offences they commit. A foundation of theory and evidence is first supplied for the assertion that ‘those who do big bad things also do little bad things’. Original research presented in the book includes a study of offending by visitors to a prison, and the concurrent criminality of those committing common driving offences and failure to produce driving documents as required. It illustrates how self-selection can complement other police methods of identifying active, serious criminals by focusing on what offenders do rather than who they are and what they have done in the past. Concentrating on the ‘usual suspects’ in the conventional way is often criticised as harassment and self-selection policing largely bypasses the issue of fairness this raises.
The book concludes with a call for the consideration, development and wider adoption of the self-selection approach, and particularly the identification of other common minor offences which flag concurrent active criminality. The authors make important suggestions for the progression of SSP research and practice, including the identification of barriers to the implementation of the approach in wider police thinking, practice and policy. Practical guidance is also provided for those thinking of developing, testing and implementing the approach. In doing so, the book will be of particular interest for policing practitioners, as well as students and scholars of policing and crime control.