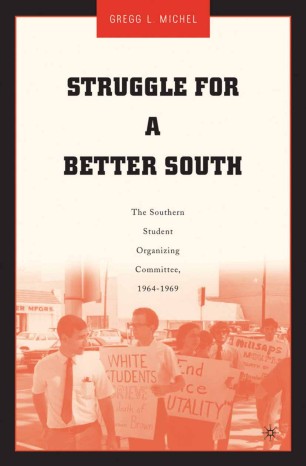 Struggle for a Better South

Struggle for a Better South dispels the notion that all whites in the South stood united against social change in the 1960s. Gregg Michel's compelling study of the Southern Student Organizing Committee (SSOC), the leading progressive organization created by young white activists in the South during that tumultuous decade, fills a crucial gap in the literature about New Left activism. Michel shows that the SSOC was the only activist group of the era that worked to cultivate white support for the social movement. The SSOC's members gave themselves the delicate task of reconciling their love for the South and its history - warts and all - with their modern-day commitment to equality and justice for all people.

Gregg L. Michel is Assistant Professor of History at the University of Texas at San Antonio.

"Gregg Michel has illuminated a little known but important anti-racist organization - "the white SNCC" - of the '60s civil rights movement and has widened our understanding of the movement's personalities, difficulties, and triumphs." - Julian Bond, Professor of History, University of Virginia

"Gregg Michel's book is enlightening and inspiring. His carefully researched history of this group of brave young white southerners in the dramatic decade of the 1960s is enhanced by the moving personal histories of the students involved. It sheds new light on the civil rights movement as a struggle and liberation of all peoples." - Constance Curry, activist, author of Silver Rights, and co-author with Winson Hudson of Mississippi Harmony: Memoirs of a Freedom Fighter

"Just when you think there can't be any more interesting stories left untold from the Sixties, along comes an enterprising historian like Gregg Michel. His subject is the rise and fall of the Southern Student Organizing Committee (SSOC), a group of white radical southern students who incorporated the Confederate flag into their organizational logo, and who spoke out at considerable personal risk in favor of civil rights and in opposition to the Vietnam War. Michel's book accomplishes the most important thing any book about the Sixties can do, and that is it shatters stereotypes." - Maurice Isserman, professor of history at Hamilton College and co-author of America Divided: The Civil War of the 1960s<

"Long overshadowed by the major civil rights organizations, the Southern Student Organizing Committee has never received the attention it deserves despite its role in helping to reshape and redefine the racial and social landscape of the American South. Gregg Michel has rescued from obscurity countless progressive southern whites who risked their reputations and their lives in their attempts to redeem the soul of a nation and who, along with their black brothers and sisters, shared a vision for an America without poverty or racism. Despite the enormity of their challenge, they refused to concede that the South was irremediably racist. Diligently researched and gracefully written, this is a history that is at once remarkable and compelling, and long overdue." - Robert A. Pratt, author of We Shall Not Be Moved: The Desegregation of the University of Georgia

"Struggle for a Better South by Gregg L. Michel is an engaging and insightful analysis of this important yet neglected group and its history. In its nuanced and richly contextualized discussion of SSOC's rise and fall, Michel's book sheds new and revealing light on the perils of and prospects for white college student-based activism in the South during this tumultuous period in our nation's history." - Waldo E. Martin, Jr., University of California, Berkeley, and author of No Coward Soldiers: Black Cultural Politics and Postwar America