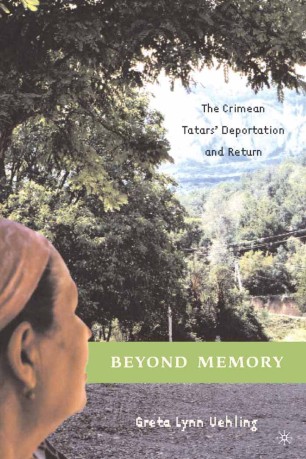 The crimean tatars’ deportation and return

Part of the Anthropology, history, and the critical imagination book series (ACHI)

In the early morning hours of May 18, 1944 the Russian army, under orders from Stalin, deported the entire Crimean Tatar population from their historical homeland. Given only fifteen minutes to gather their belongings, they were herded into cattle cars bound for Soviet Central Asia. Although the official Soviet record was cleansed of this affair and the name of their ethnic group was erased from all records and official documents, Crimean Tatars did not assimilate with other groups or disappear. This is an ethnographic study of the negotiation of social memory and the role this had in the growth of a national repatriation movement among the Crimean Tatars. It examines the recollections of the Crimean Tatars, the techniques by which they are produced and transmitted and the formation of a remarkably uniform social memory in light of their dispersion throughout Central Asia. Through the lens of social memory, the book covers not only the deportation and life in the diaspora but the process by which the children and grandchildren of the deportees 'returned' and anchored themselves in the Crimean Penininsula, a place they had never visited.

GREATA LYNN UEHLING is a Postdoctoral Fellow with the Solomon Asch Center for Study of Ethnopolitical Conflict, Philadelphia, USA.