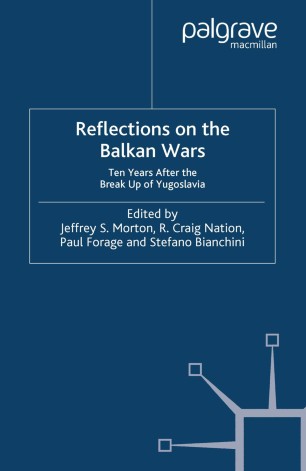 Reflections on the Balkan Wars: Ten Years After the Break Up of Yugoslavia

In this collection scholars, policymakers and military officials explore the conditions that gave rise to the Balkan wars in the 1990s, the application of international law to the wars the conduct of the wars, and post-war issues. The essays are based on presentations given at the International Conference on the Balkans held at Florida Atlantic University in February 2002. The contributors come from varied backgrounds, including international law, genocide studies, peacekeeping, European politics, communications, history and military studies.

"The volume Reflections on the Balkan Wars could not come at a more timely moment. A number of the issues discussed by the contributors are central to our understanding of the wars of the Yugoslav succession and the dilemmas facing the international community at present. Of special note are the chapters dealing with humanitarian intervention (pro and con), the use of airpower in Kosovo, and the consequences of recognizing the republics within existing boundaries. The concluding chapter, by Professors Bianchini and Forage argues that European institutions must be strengthened in anticipation of further challenges in the Balkans. Thoughtful American policy makers with an interest in the Balkans should be sure to consult the aforementioned chapters in this study." - Paul Shoup, Professor Emeritus, University of Virginia

"This study is an excellent resource for academics, policy makers and general readers who want to understand the events in former Yugoslavia that precipitated war and the subsequent international efforts meant to keep the fragile peace. The volume benefits greatly from the expertise and diversity of its authors, who range from across the academic disciplines to military professionals. Now, some years after Operation Allied Force, the authors offer a fresh look at the actors and organizations that played major roles during and after the Balkan crises that dominated the 1990s. This book does a first-rate job of analyzing the political norms and practices that provoked and then guided international intervention, and of raising the many lessons to be learned about modern conflict from the still unresolved tensions in the Balkans." - Mary N. Hampton, Professor of National Security, Air Command and Staff College