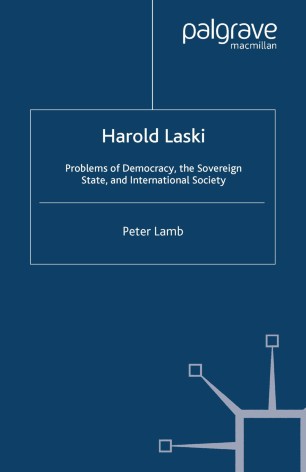 Harold Laski, born in England at the end of the Nineteenth-century, is a theorist who helped shape political thought throughout much of the first half of the Twentieth-century. Primarily recognized for his contribution to the British pluralist tradition, arguing against state sovereignty and advocating devolution of political power to non-state organizations, Laski's latest writings focused on the relation between capitalism and the sovereign state. This book explores both Laksi's pluralist thinking as well as his later writings on the problems of maintaining and developing democracy and freedom both within and in the relations between capitalist societies. Lamb seeks to explore Laski's work on international politics and its continuing significance to the understanding of politics and the state today.

PETER LAMB is a Politics instructor in the School of Politics, International Relations and the Environment at Keele University, UK.

"Lamb has provided an overdue retrieval, sympathetic but fair-minded, based on up-to-date research, of a historically important writer. He explains why Laski's many theoretical projects once attracted such interest and why they can still find some resonance in today's political world. Particularly innovative is Lamb's account of Laski's writings on international politics, largely ignored by earlier commentators. Lamb's study is a much-needed re-appraisal of a significant figure. He shows that many of Laski's concerns turn out to have much in common with those of present-day social democratic commentators - in particular the capacity of a state to effect social justice in conditions of global interdependence."

"Peter Lamb's study of this overly neglected thinker is a highly relevant recovery. This lucid, well-judged and sympathetic account of Laski's later thought on the 'myth' of the sovereign state is highly pertinent for cosmopolitan democrats, students of normative international relations and seekers of a genuinely radical 'third way'."