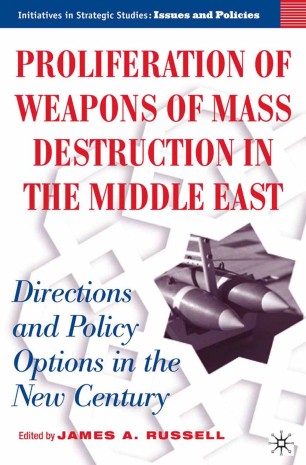 Proliferation of Weapons of Mass Destruction in the Middle East: Directions and Policy Options in the New Century

Part of the Initiatives in Strategic Studies: Issues and Policies book series (ISSIP)

This vital book examines why states seek to gain Weapons of Mass Destruction, a crucial issue in developing strategies against proliferation. Leading experts examine specific countries and the interplay among political, economic, cultural and regional factors driving decisions whether to acquire WMD.

"This is a marvelous in-depth examination of one of the most complicated and dangerous security issues facing the United States, its friends and allies, and potential opponents in this critical region. This book represents a major contribution to the literature on WMD proliferation in the Greater Middle East at the same time that it probes the domestic interests that have shaped several Middle Eastern governments quest for a nuclear silver bullet."

"This book is a welcome addition to the literature on WMD developments in the Middle East. Particularly valuable are the insights provided about Saudi Arabia and Syria, and the nonproliferation lessons derived from Iraq and Libya."

"James A. Russell has assembled an outstanding collection of essays on the challenges posed by the proliferation of weapons of mass destruction, with particular focus upon the impact of this process in the Middle East. The volume contains a series of excellent case studies on WMD acquisition activities in this critical region, including descriptions of Israel's extensive nuclear weapons development efforts, the illicit nuclear proliferation networks of Pakistan's A. Q. Khan, and the intriguing tale of Libya's recent voluntary renunciation of its WMD programs. The collection closes with a series of insightful policy discussions on a variety of non-proliferation, counter-proliferation, and threat reduction initiatives in and relevant to the Middle East."

"A series of balanced and objective insights into one of the world's most critical security problems."