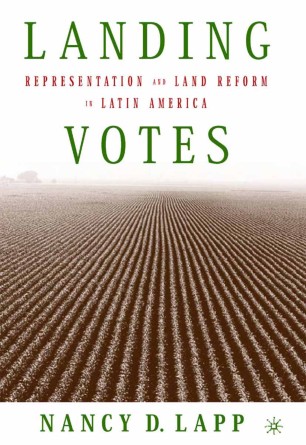 Landing Votes explores the conditions under which democratic Latin American governments address persistent political and economic inequities. The book points out a surprising 'coincidence': nearly every extension of suffrage to the rural poor occurred at the same time as land reform. Politicians did not merely react to peasants' demands; rather, they sought political power by extending the right to vote while redistributing land. The book concludes that party institutionalization enhanced the prospects for reforms by holding politicians accountable. More significant reforms occurred which benefited more of the rural poor where institutionalized parties competed for their votes.

"The originality of [Lapp's] argument and the ability to apply it not only to the three main cases but also elsewhere in Latin America and the rest of the world make Lapp's book a must read for anyone interested in the politics of the poor." - Glen Biglaiser, Bowling Green State University

faces currently in addressing the concerns of its poor." - David S. Brown, Department of Political Science, University of Colorado, Boulder