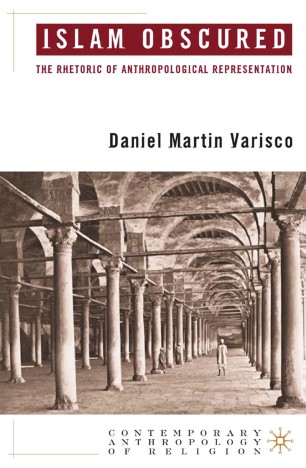 The Rhetoric of Anthropological Representation

Ethnographers have observed Muslims nearly everywhere Islam is practiced. This study analyzes four seminal texts that have been read widely outside anthropology. Two are by distinguished anthropologists on either side of the Atlantic, Islam Observed (by Clifford Geertz in 1968) and Muslim Society (by Ernest Gellner in 1981). Two other texts are by Muslim scholars, Beyond the Veil (Fatima Mernissi in 1975) and Discovering Islam (by Akbar Ahmed in 1988). Varisco argues that each of these four authors approaches Islam as an essentialized organic unity rather than letting 'Islams' found in the field speak to the diversity of practice. The textual truths engendered, and far too often engineered, in these idealized representations of Islam have found their way unscrutinized into an endless stream of scholarly works and textbooks. Varisco's analysis goes beyond the rhetoric over what Islam is to the information from ethnographic research about what Muslims say they do and actually are observed to do. The issues covered include Islam as a cultural phenomenon, representation of 'the other', Muslim gender roles, politics of ethnographic authority, and Orientalist discourse.