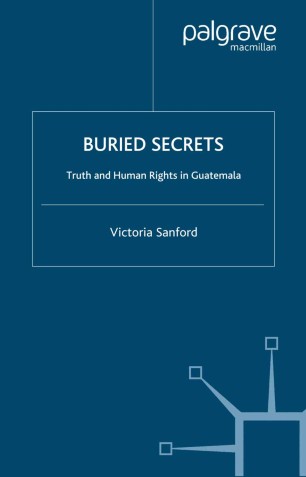 Truth and Human Rights in Guatemala

Between the late 1970s and the mid 1980s, Guatemala was torn by a civil war which came to be known as La Violencia. During this time of mass terror and extreme violence, more than 600 massacres occurred in villages destroyed by the army, one and a half million people were displaced, and more than 200,000 civilians murdered. 83% of the victims were Maya, the indigenous people of Guatemala. Buried Secrets brings these chilling statistics to life as it chronicles the journey of Mayan survivors seeking truth, justice, and community healing and demonstrates that the Guatemalan army carried out a systematic and intentional genocide against the Maya. Victoria Sanford provides us with an insider's look at the workings of the Commission for Historical Clarification through the exhumation of clandestine cemeteries. The book is based on exhaustive research, including more than 400 testimonies from massacre survivors, interviews with members of the forensic team, human rights leaders, high-ranking military officers, guerrilla combatants, and government officials. Buried Secrets traces truth-telling and political change from isolated Maya villages to national political events, and provides a unique look into the experiences of Maya survivors as they struggle to rebuild their communities and lives.