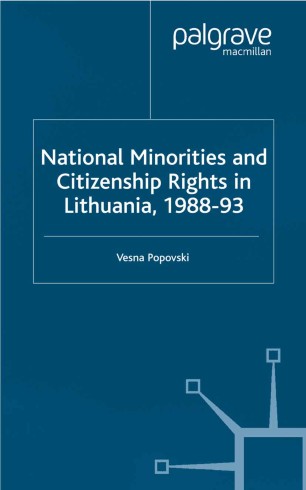 This book examines the emergence of nationalism in Lithuania, specifically the Lithuanian national movement, known as Sajudis, and its approach towards the citizenship rights of national minorities. The study concentrates on the period between 1988 and 1993 when the national majority and minorities began forming and debating citizenship rights. The question of citizenship rights of national minorities is not ordinarily viewed as a problem with regard to Lithuania and there has consequently been minimal attention devoted to this topic. This book addresses this neglect and brings the underlying assumptions into critical perspective by analysing the Lithuanian situation not just according to the letter of the law but also in terms of how these laws were implemented and how the minorities responded to them. In doing so, the book explores the conflict which emerged between the growing national movement and the ideals of citizenship such as multicultural pluralism, diversity and heterogeneity. The book therefore has relevance to all those who are interested in postcommunist societies; and in particular the tensions that frequently develop between nationalism and citizenship.