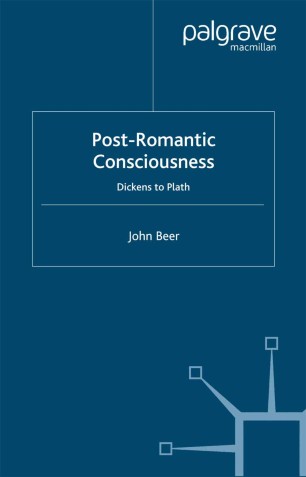 In this sequel to his Romantic Consciousness, John Beer discusses further questionings of human consciousness; both the degree to which Dickens's conscious dramatizing differs from the subconscious workings of his psyche and the exploration of subliminal consciousness by nineteenth-century psychical researchers.

John Beer is Emeritus Professor of English Literature, University of Cambridge and Fellow of Peterhouse. His work on Romanticism includes Coleridge the Visionary, Coleridge's Poetic Intelligence, Blake's Humanism, Blake's Visionary Universe, Wordsworth and the Human Heart, Wordsworth in Time, Questioning Romanticism (ed.), Romantic Influences and Providence and Love .He has edited Coleridge's Poems for Everyman's Library, his Aids to Reflection for the Collected Works and is General Editor of the series Coleridge's Writings .

'As the editors of his Festchrift hoped, some years ago now, John Beer's lucid, infectiously enthusiastic and unignorable interrogation of Romanticism continues. . . his work is quietly and usefully informed by the new vistas. . . Beer has shown himself to be a critic unusually capable of handling the reach and dynamics of the Coleridgean repertoire. But in this work, he is even more ambitious. The ambition is obvious in the historical range attempted. It is matched by a boldly speculative question that he addresses directly.' - Paul Hamilton, Queen Mary, University of London, UK, Romanticism

'Beer's book makes a persuasive case for the enduring legacy of the Romantic preoccupation with that part of the self that is distinct from 'conscious ratiocination.' - Ann Gaylin, Times Literary Supplement

'This is one of the most suggestive accounts of the diverse influences exerted by Romantic thought and feeling on the work of subsequent writers. John Beer ranges widely and authoritatively through the literature of the last two centuries in a memorable study of originality and enlightenment.' - Seamus Perry, Fellow of Balliol College and Tutor in English, University of Oxford, UK

'At once a sequel to Romantic Consciousness and a fully independent work, Post-Romantic Consciousness offers a series of subtle readings of literary and philosophical writings, always set in pertinent biographical context, which convincingly substantiate Beer's main line of argument. This is that the troubled relationship between ratiocination and a deeper level of consciousness, termed 'Being' by several thinkers including Heidegger, persists as a legacy from Romanticism, yet with an important shift as Darwinian theory took hold: a debate that had operated chiefly in a religious frame now shifted explicitly to the inner world of the divided psyche. Beer establishes his contention in a literary setting through a detailed interpretation of Dickens's failure to finish Edwin Drood in terms of the conflict between the author's expressly benevolent attitude to humanity and the darker impulses informing his engagement with animal magnetism. Beer moves from here to offer fascinating insights into the motives that drove the psychical research of two rather neglected figures, F.W.H. Myers and Edmund Gurney. By the time we reach the compelling chapters on Woolf's epiphanic 'moments of Being' and Lawrence's 'movements of Being', and on Plath and Hughes, we have become aware of a hitherto unappreciated way in which literary works may deal with the profoundest philosophical questions surrounding human being.' - James Vigus, Visiting Research Fellow, Queen Mary, University of London, UK