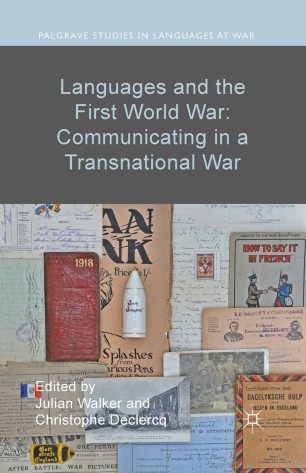 Languages and the First World War: Communicating in a Transnational War

This book examines language change and documentation during the First World War. With contributions from international academics, the chapters cover all aspects of communicating in a transnational war including languages at the front; interpretation, translation and parallels between languages; communication with the home front; propaganda and language manipulation; and recording language during the war. This book will appeal to a wide readership, including linguists and historians and is complemented by the sister volume Languages and the First World War: Representation and Memory which examines issues around the representation and memory of the war such as portrayals in letters and diaries, documentation of language change, and the language of remembering the war.
Julian Walker is a British Library educator, an artist and writer. His books on language include Discovering Words, Team Talk: Sporting Words and their Origins and Trench Talk.
Christophe Declercq is a lecturer in translation (University College London, UK and University of Antwerp, Belgium) who has been working on Belgian refugees in Britain for well over a decade. On the subject, he has spoken widely at conferences in both Britain and Belgium, has worked with the BBC and VRT (Belgian television) and manages several social media outlets.