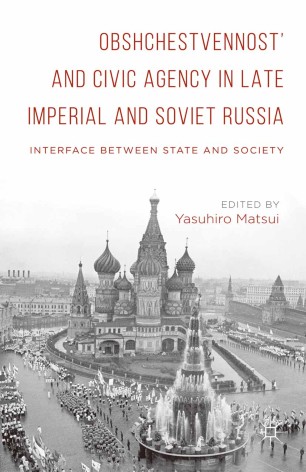 Obshchestvennost’ and Civic Agency in Late Imperial and Soviet Russia

Interface between State and Society

In modernizing Russia, obshchestvennost', an indigenous Russian word, began functioning as a term to illuminate newly emerging active parts of society and their public identities. This volume approaches various phenomena associated with the term throughout the revolution, examining it in the context of the press, public opinion, and activists.

Yasuhiro Matsui is Professor at the Faculty of Social and Cultural Studies, Kyushu University, Japan. He previously lectured in political science and international relations at the Faculty of Law, Kagawa University in Japan. His past research has been on the Communist Youth League (Komsomol) in the 1920s and the proto-public sphere under Stalin.

“This collection of essays provides an excellent starting point for further research on both conceptions of obshchestvennost’ and obshchestvennost’ as lived experience. ... This collection of essays then is a useful addition to the literature not only on obshchestvennost’ but also on the role of agency even under the most oppressive governments.” (Curtis Richardson,Jahrbücher für Geschichte Osteuropas. jgo.e-reviews, Vol. 8 (1), 2018)
“The nine chapters that make up this book are arranged chronologically and written by leading scholars from a variety of Japanese universities and institutes. They display an impressive mastery of the latest scholarship in English, Russian, German, and Japanese and make a valuable contribution to our understanding of both the late tsarist and Soviet periods.” (Tracy Nichols Busch, The Russian Review, Vol. 76 (1), January, 2017)

“The collection covers a truly admirable scope of topics, and the chapters can serve as reference for scholars of various fields … . significant contribution to the literature on state and society in modern imperial and Soviet Russia. It addresses many themes to which earlier works did not pay enough attention and opens the way for uncharted areas of research. It provides important insights in particular to the complexity of the relationship of state and society in Soviet Russian times.” (Alexandra Medzibrodszky, Contributions to the History of Concepts, Vol. 12 (2), 2017)

“This is a carefully structured monograph composed of nine chapters, each focused on the same phenomenon of obshchestvennost’ … . the collection presents a major contribution to the field, clearing the ground for the development of a new comprehensive model of obshchestvennost’.” (Ilya V. Gerasimov, Revolutionary Russia, Vol. 29 (1), 2016)