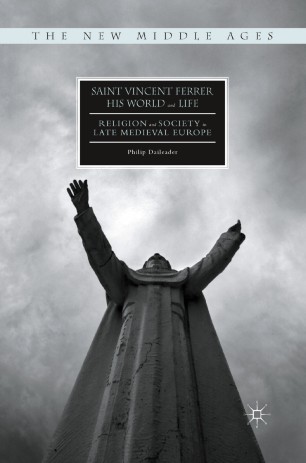 The fourteenth and fifteenth centuries were times of tumultuous change in medieval Europe; they witnessed the Black Death, the Great Papal Schism, heightened fears of the apocalypse, and the elimination of Spain's non-Christian population. Few figures were as widely and as intimately involved in late medieval Europe's struggles as Saint Vincent Ferrer. Perhaps the foremost preacher of his day, Ferrer spent the final two decades of his life traversing Europe, preparing the world for its imminent destruction. Saint Vincent Ferrer (d. 1419), His World and Life reassesses the controversial preacher's motives, methods, and impact, tracing Ferrer's journey from obscure logician to angel of the apocalypse, as he came to be known. At the same time, the book offers new insights into the depth and breadth of late medieval apocalyptic anticipation, and into the processes that ultimately led to the expulsions of Spain's Jews and Muslims.

Philip Daileader is Associate Professor of History at The College of William and Mary, USA. He is the author of True Citizens: Violence, Memory, and Identity in the Medieval Community of Perpignan, 1162-1397 (2000; French translation, 2004) and co-editor of French Historians, 1900-2000: New Historical Writing in Twentieth-Century France (2010).

“Saint Vincent Ferrer, His World and Life is carefully researched and, above all, a good read. It brilliantly accomplishes the goals Daileader sets in the introduction. It presents a nuanced view of the period’s most important evangelist by outlining the religious and social conditions that motivated his views. The apocalypticism that shaped his moral reform program and his efforts to segregate non-Christian communities also illuminates the process by which Spain came to reject its diverse religious past.” (Sol Miguel-Prendes, Speculum, Vol. 94 (3), July, 2019)