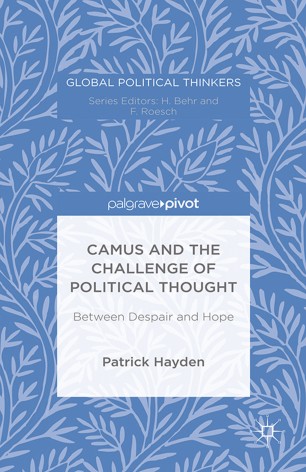 Camus and the Challenge of Political Thought: Between Despair and Hope

Albert Camus was a formative artist, writer and public figure whose work defies conventional labels, and whose legacy is controversial but substantial. His distinctive contribution to modern ethical and political thought remains far from settled. Camus and the Challenge of Political Thought comprehensively yet concisely explores how Camus's compelling ideas of absurdity and rebellion emerged, how his complex political engagements and positions developed, and how his conception of an ethics of limits and measure retains a vital, contemporary resonance in an era of unsettling global politics. Drawing upon the full range of Camus's notebooks, novels, plays and philosophical essays, Hayden shows Camus to be an original political thinker of human dignity and freedom whose life and work sought to navigate between the twin dangers of idealistic optimism and nihilistic despair.