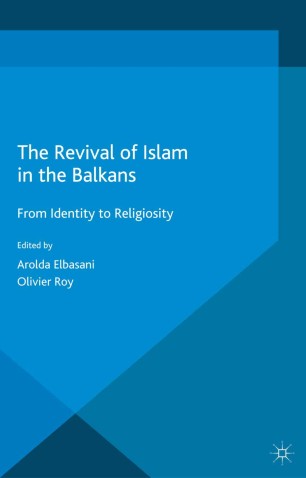 The Revival of Islam in the Balkans

From Identity to Religiosity

Part of the The Islam and Nationalism Series book series (INAT)

This book shifts analytical focus from macro-politicization and securitization of Islam to Muslims' choices, practices and public expressions of faith. An empirically rich analysis, the book provides rich cross-country evidence on the emergence of autonomous faith communities as well as the evolution of Islam in the broader European context.

“The Revival of Islam in the Balkans is a timely addition to the literature with its rich insights and innovative, path-breaking studies. … the book is a must-read, and the exceptional editorial work makes it even more appealing and easy to follow. There is no doubt that this book will be a useful reference work on Islam and Islamic practices in general, and on the Balkans in particular.” (Nikos Christofis, LSE Review of Books, blogs.lse.ac.uk, April, 2016)

“The book under review The Revival of Islam in the Balkans is thus a welcome exposition of a much neglected subject. … It will appeal principally to academics and tertiary students, especially those with an interest in anthropology, Eastern Europe, and religion.” (Abdullah Drury, Islam and Christian-Muslim Relations, March, 2016)

“The Revival of Islam in the Balkans … offers further analysis of religious changes in the Balkans after communism. These particular studies represent valuable contributions to the subject due to their thorough identification and evaluation of crucial elements that have influenced the contemporary religious scene in the Balkans. … This volume demonstrates that local Muslim communities have not only been able to reject foreign influences, but also to construct new methods to theoretically and practically defend their traditional practice.” (Hazim Fazlić, Occasional Papers on Religion in Eastern Europe, Vol. 36 (1), 2016)

“The Elbasani and Roy volume focuses on the eastern Balkans, excluding the western states of former Yugoslavia, ascribing a special importance to Kosovo and Albania while also making room for Greece and Bulgaria. … Elbasani-Roy contributors target an audience interested in the region’s eastern section.” (Vjekoslav Perica, Slavic Review, 2016)

“These eight case studies are valuable contributions to a better understanding of Islam in the Balkans. From this standpoint, the editors of The Revival of Islam in the Balkans have succeeded in their bid to show the ‘emerging mosaic of Islamic religiosity, defined here as the way an individual believer experiences his or her relation to religion and faith’ … and this makes the book an important one.” (Xavier Bougarel, Suedosteuropa. Journal of Politics and Society, Issue 3, 2016)

“This is a timely collection of essays in that it addresses what has been the major obstacle to the study of post-communist Islam in the Balkans … . the book offers empirically rich chapters looking at the multivocality of actors speaking for Islam in the Balkans today. … this volume is a milestone for developing robust comparisons of divergent socialist and post-socialist trajectories of Islam in the Balkans for years to come.” (David Henig, Europe-Asia Studies, Vol. 68 (8), 2016)