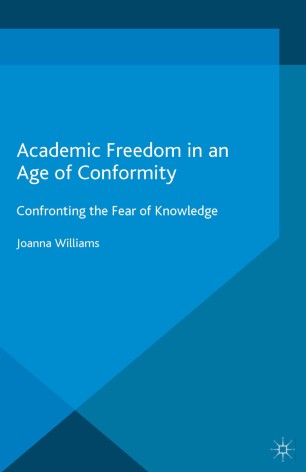 Academic Freedom in an Age of Conformity

Confronting the Fear of Knowledge

Academic freedom is increasingly being threatened by a stifling culture of conformity in higher education that is restricting individual academics, the freedom of academic thought and the progress of knowledge – the very foundations upon which academia and universities are built.

Once, scholars demanded academic freedom to critique existing knowledge and to pursue new truths. Today, while fondness for the rhetoric of academic freedom remains, it is increasingly criticised as an outdated and elitist concept by students and lecturers alike and called into question by a number of political and intellectual trends such as feminism, critical theory and identity politics.

This provocative and compelling book traces the demise of academic freedom within the context of changing ideas about the purpose of the university and the nature of knowledge. The book argues that a challenge to this culture of conformity and censorship and a defence of academic free speech are needed for critique to be possible and for the intellectual project of evaluating existing knowledge and proposing new knowledge to be meaningful. This book is that challenge and a passionate call to arms for the power of academic thought today.