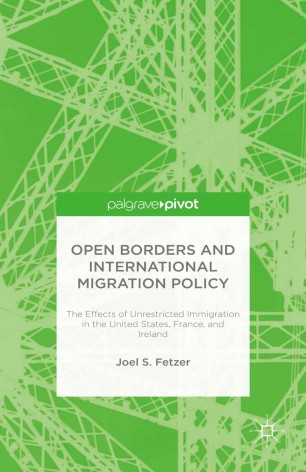 Open Borders and International Migration Policy: The Effects of Unrestricted Immigration in the United States, France, and Ireland

Although philosophers debate the morality of open borders, few social scientists have explored what would happen if immigration were no longer limited. This book looks at three examples of temporarily unrestricted migration in Miami, Marseille, and Dublin and finds that the effects were much less catastrophic than opponents of immigration claim.

Joel S. Fetzer is Frank R. Seaver Professor of Social Science at Pepperdine University in Malibu, California, USA. Author or co-author of many scholarly books and articles, he specializes in the politics of international migration in Europe, North America, and East Asia.

'Joel Fetzer skilfully challenges conventional wisdom on why immigration should be restricted by showing how cities as different as Miami, Dublin and Marseilles have each coped well with rapid large-scale immigration. This book makes an important empirical and analytical contribution to twenty-first century debates about immigration.' Professor Bryan Fanning, School of Social Policy, Social Work and Social Justice, University College Dublin, Ireland

'Joel Fetzer's book is the result of a dare put forward at a symposium about his ability to demonstrate, in contexts as diverse as Dublin, Marseille and Miami, the positive and negative impacts of open borders on the host society. The work is highly topical: Europe has experienced flows of asylum seekers on a scale not seen for the last thirty years, thousands of migrants are dying in the Mediterranean trying to reach this continent, the smuggling industry benefits economically from immigration restrictions, and camps form at the migration bottlenecks of Calais, Ceuta, and Melilla and at the Greco-Turkish border. Considerable sums of money are spent by the countries of immigration to counter such flows. The negative effects of closed borders thus do not need to be demonstrated. But what are the effects of opening the borders on the social environment? This is the question that Joel Fetzer's book addresses with originality, focusing on cases of so-called 'uncontrolled immigration.' An expert on access to social citizenship, he covers the labor market, public finances, housing, schools, crime, and racial violence in turn and shows that there is no single answer to all of these questions; everything depends on the context, and the negative social effects of uncontrolled immigration in Marseille or Dublin may become positive in Miami or vice versa depending on the issues discussed. This is the only rational response to cost/benefit analyses of migration, which often deal with the topic without addressing the diversity of contexts in which they are used. The result of an initial challenge from a colleague, this book thus presents us with a great substantive challenge.' Catherine Wihtol de Wenden, Senior Research Fellow, Centre de Recherches Internationales, Sciences Po, Paris, France

'In this work, Joel Fetzer, a leading international scholar of migration, uses a number of case studies to consider the empirical consequences of opening borders to immigrants. The result is a sophisticated, original, and extremely timely account that shows why Western societies may have far less to fear and much more to gain from unregulated migration than they might think.' Matthew J. Gibney, Elizabeth Colson Professor of Politics and Forced Migration, University of Oxford, UK