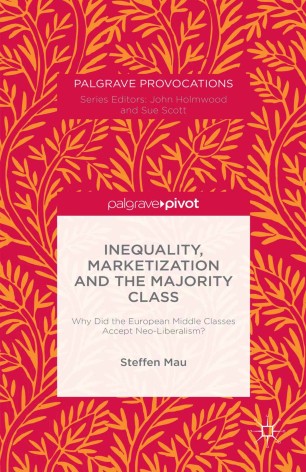 Inequality, Marketization and the Majority Class: Why Did the European Middle Classes Accept Neo-Liberalism?

Why were the European middle classes ready to acquiesce in neo-liberalism? This book argues that upward mobility, the growth of individual and family assets, the growing significance of private provision, and processes of individualization contributed to a major transformation of the middle classes, making them more prone to embrace inequality and market principles. It shows how the self-interest of large sections of the middle classes undermined social democracy and paved the way for neo-liberal reforms, making their socio-economic positioning ever more precarious and reducing their political power. Central to the debate is the question of how the middle classes can rebalance the relationship between the Market and state intervention, so as to establish a new social equilibrium.

Steffen Mau is Professor of Macrosociology at Humboldt-University Berlin, Germany. Previously he worked as Professor of Political Sociology at the University of Bremen, Germany. His main publications include: The Moral Economy of Welfare States (2003), Social Transnationalism (2010) and European Societies. Mapping Structure and Change (with Roland Verwiebe 2010).