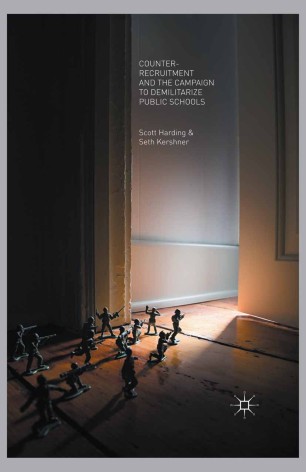 Counter-Recruitment and the Campaign to Demilitarize Public Schools

This book describes the various tactics used in counter-recruitment, drawing from the words of activists and case studies of successful organizing and advocacy. The United States is one of the only developed countries to allow a military presence in public schools, including an active role for military recruiters. In order to enlist 250,000 new recruits every year, the US military must market itself to youth by integrating itself into schools through programs such as JROTC (Junior Reserve Officers' Training Corps), and spend billions of dollars annually on recruitment activities. This militarization of educational space has spawned a little-noticed grassroots resistance: the small, but sophisticated, “counter-recruitment” movement. Counter-recruiters visit schools to challenge recruiters' messages with information on non-military career options; activists work to make it harder for the military to operate in public schools; they conduct lobbying campaigns for policies that protect students' private information from military recruiters; and, counter-recruiters mentor youth to become involved in these activities. While attracting little attention, counter-recruitment has nonetheless been described as “the military recruiter's greatest obstacle” by a Marine Corps official.