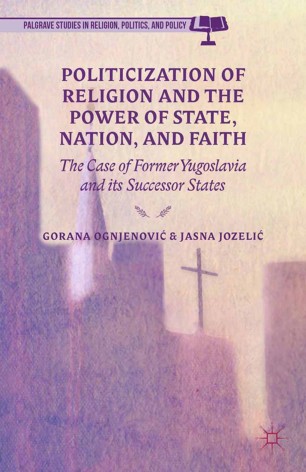 Politicization of Religion, the Power of State, Nation, and Faith

The Case of Former Yugoslavia and its Successor States

(Ab)use of religion as a political means to an end: the achievement of nationalist political goals, analyzing 'how' through which mechanisms this phenomenon has been and still is practiced in South-Eastern Europe.

'In difficult times it is easy to fall back on traditional values, like for example religion or nation, especially if they were repressed. This happened in mid-eighties in former Yugoslavia when politicians revoked national and religious differences using them for political purposes. But they went one step too far. What followed were tragic wars. In spite of that, even twenty years after the war and collapse of the Yugoslav state, religions continue to be politicized. This is why the book that shows how it happened, is so important.' - Slavenka Drakuli?, Writer and Political Commentator, Eurozine and Guardian, author of They Would Never Hurt a Fly: War Criminals on Trial in the Hague (2004)

'The topics addressed in this volume on the politicization of religion could not be more urgent, the multi-disciplinary questioning of the politically correct and intellectually lazy label "fundamentalism" not more to the point. The contributions assembled demonstrate how poorly understood the so-called "civil war" in Bosnia-Herzegovina still remains. A long overdue clear-eyed look at a phenomenon that we continue to misconstrue only at our peril.' - Arne Johan Vetlesen, Professor of Philosophy, University of Oslo, Norway, author of Evil and Human Agency (2005)