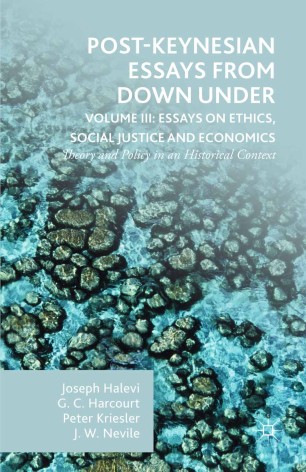 Post-Keynesian Essays from Down Under Volume III: Essays on Ethics, Social Justice and Economics

Joseph Halevi, G. C. Harcourt, Peter Kriesler and J. W. Nevile bring together a collection of their most influential papers on post-Keynesian thought. Their work stresses the importance of the underlying institutional framework, of the economy as a historical process and, therefore, of path determinacy. In addition, their essays suggest the ultimate goal of economics is as a tool to inform policy and make the world a better place, with better being defined by an overriding concern with social justice. Volume III explores the ethics of economics.

Joseph Halevi was born 1946 in Haifa, then British Palestine. An Alama Mater University of Rome La Sapienza, he began teaching economics at the New School of Social Research in New York and later at Rutgers University. He has a permanent appointment at the University of Sydney. He was Visiting Professor at the University of Connecticut and regularly in France at the Universities of Grenoble, Nice and Amiens. He has authored many books and contributed to the first edition of The New Palgrave Dictionary of Economics in 1987 and co-edited Beyond the Steady State with Macmillan in 1992, among others.

Peter Kriesler currently teaches in the School of Economics at the University of New South Wales. He also organizes the Annual Australian Society of Heterodox Economists Conference, which is now in its fourteenth year. Peter's main publications are in the areas of history of economic thought, heterodox economics, the Australian economy, labour economics, and economic perspectives on human rights.

J. W. Neville is Emeritus Professor at the University of New South Wales in Sydney, Australia. He has published extensively on fiscal policy, macroeconomic policy in general, economics and ethics, and the history of economic thought. He has served on a number of statutory authorities and government enquiries.

'The neo-liberal experiment has failed. The widespread de-regulation of markets has led to financial crisis and mass unemployment. The contributors to this volume are Keynesian economists who for decades have resisted the neo-liberal onslaught. They believe that governments have the ability and duty to ensure full employment and decent pay for all. Their optimism is sorely needed.'

'The socioeconomic and political context has been carefully interwoven through these different essays relating to social justice, a widely debated topic in this day and age. It is impressive how the authors have developed Christian thought and the Christian call for social-welfare, prompting the reader to social-awareness and social-consciousness.'

The Most Reverend Dr Philip L Freier, Primate of Australia

'This collection of essays makes an outstanding contribution to the discussion of ethics and economics. It moves economics beyond the limits of the 'scientific' enquiry and the cramped options of dualism to embrace its moral responsibilities. Halevi, Harcourt, Kriesler and Nevile share a sense of humanity, sometimes characteristic of post-Keynesian economists, and identify those human rights which must form part of the objectives of any economic decision. The essays incorporate into their analyses ethical implications of economic goals, their priorities and the policies which serve these; they show that introducing ethical work practices (eg) tends to raise productivity rather than costs. Their approaches are empirical and analytical. The authors are especially well qualified, individually and in combinations, to comment on Australian institutions, within a global economy, and on mainstream as well as post-Keynesian analytical approaches. This invaluable project confirms their presence as significant leaders in developing the ethical ambitions of economics and its policies through a post-Keynesian oevre and Australian example.'

'The authors of this volume studied, taught and did research to make the world a better place for ordinary people. If their work was often extraordinary, their motivation was typical of the generation that entered economics in the wake of the Great Depression and Keynes's General Theory. Alas, their sense of economics as a moral endeavor, and of the work of an economist as a calling, has long since ceased to be a major drawing card, and economics is the worse for the absence of debate and discussion of its moral foundations. Both for students just entering the field and for mature scholars who either never encountered or have forgotten the moral dimension, this volume is a timely corrective to the idea that economics can or should exist in an ethical vacuum.'

'Searching for gold, you must look down under. Here are riches for the questioning economist, perplexed by unjust policy outcomes of seemingly neutral analysis. Enjoy finding many nuggets of wisdom on the under-valued but inescapable impact of ethics and of historical-institutional context, with tributes to some true pioneers of ideas.'