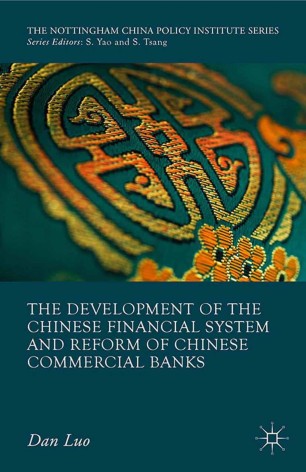 The Chinese financial sector, despite having been developed at a much later stage compared with other developed nations, has achieved substantial progresses over the past decades. By the end of 2014, a total of 16 commercial banks had been listed on the stock exchanges, exerting strong impact onto the market indices and contributing significantly to the country's sustained economic growth.

The author concludes by discussing the role of the central bank, namely the People's Bank of China (PBOC), and its role in implementing effective policies to promote economic growth.

Dr Dan Luo is lecturer in Business and Finance at the School of Contemporary Chinese Studies (SCCS). She previously worked as a research fellow in the Centre of Global Finance, University of the West of England. She was a post-doctorate research fellow at School of Contemporary Chinese Studies, University of Nottingham, where she was awarded her PhD and MA in Finance and Investment. She obtained her BA (Hons) Management in Accounting and Finance from Beijing Institute of Technology, China in 2005. She has been a member of the Association of Chartered Certified Accountants (ACCA) since 2007. Dr Luo's research interests focus on the Chinese financial market, in particular the banking sector and stock market. She has also conducted intensive research on asset pricing, stock market volatility and income inequality. Her work has been published in leading journals such as The World Economy and The Journal of Applied Financial Economics.