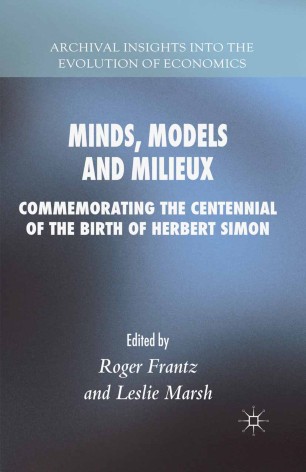 Commemorating the Centennial of the Birth of Herbert Simon

This book is a collection of specially-commissioned chapters from philosophers, economists, political and behavioral economists, cognitive and organizational psychologists, computer scientists, sociologists and permutations thereof as befits the polymathic subject of this book: Herbert Simon. The tripartite of the title, Minds, Models and Milieux, connotes the three inextricably linked areas to which Herbert Simon made the most distinguished of contributions. 'Minds' connotes Simon's abiding interest in theorizing human behavior, rationality, and decision-making; 'Models' connotes his extensive computer simulation work in the service of his interest in understanding minds, but also in the service of minds that are situated in a complex social 'Milieux'.

This collection while intended to commemorate the centenary of Simon's birth simultaneously offers a timely reassessment of some of his central insights and illustrates the exponentially growing interest in Simon's work from beyond the usual disciplines and constituencies.

Roger Frantz is Professor of Economics at San Diego State University, USA. He serves on the Board of Directors for the Society for the Advancement of Behavioral Economics. His books include the co-edited Friedrich Hayek and Behavioral Economics (Palgrave Macmillan, 2012), Renaissance in Behavioral Economics: Essays in Honor of Harvey Leibenstein (2007), Two Minds: Intuition and Analysis in the History of Economic Thought (2005), and X-Efficiency: Theory, Evidence, and Applications (1988).

Leslie Marsh is Senior Researcher in the Faculty of Medicine at The University of British Columbia, Canada. His books include Propriety and Prosperity: New Studies on the Philosophy of Adam Smith (Palgrave Macmillan, 2014), A Companion to Michael Oakeshott (2012), and Hayek in Mind: Hayek's Philosophical Psychology (2011). He is the prime mover behind the setting up of EPISTEME: Journal of Individual and Social Epistemology, Cosmos + Taxis: Studies in Emergent Order and Organization and the Michael Oakeshott Association.