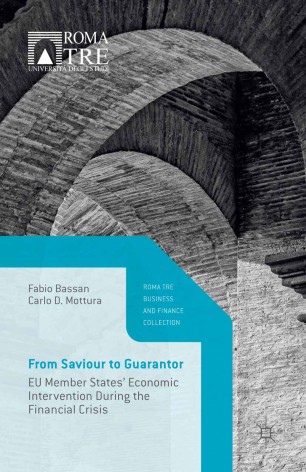 From Saviour to Guarantor

State guarantees commonly function as financial panacea, allowing states to consolidate banking systems and create intergovernmental funds. Rules surrounding state guarantees were relaxed during the 2007-2008 financial crisis, allowing states to use them for financing small and medium-sized enterprises (SMEs) and workers' severance payments. Despite many multi-level interventions in many areas after the financial crisis, from international treaties to EU regulations, no specific regulation has been put in place to control state guarantees. This book addresses the subject of state guarantees in the Eurozone, and questions the stability of the instruments implemented so far by states and by the European Union. Using a methodology combining law and finance, it examines the tools adopted by European institutions and Member States in the EU's evolving institutional context, in order to evaluate the effectiveness of the tools themselves as well as of the new European institutional framework. It also addresses the unconventional measures adopted by the European Central Bank, its role as safeguard for European state guarantees and its interaction with the European Union and national courts. In From Saviour to Guarantor the authors suggest that the absence of specific regulatory interventions and the variety and vagueness of existing rules has resulted in state guarantees further destabilising public international finance.

Carlo Mottura is Professor of Financial Mathematics, Financial Valuation and Risk Management at the Department of Business Studies at 'Roma Tre' University, Italy. His research interests include the control of risks, financial valuation under uncertainty, financial restructuring, and enterprise evaluation. He has also lead research projects funded by the Consiglio Nazionale delle Ricerche (CNR).