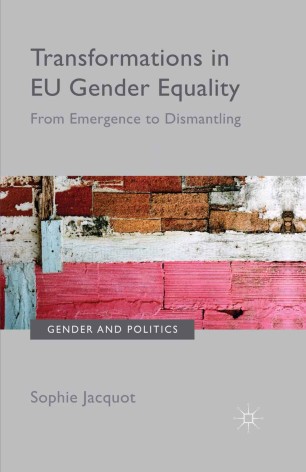 From Emergence to Dismantling

In a context of economic and budgetary crisis, this book presents a long-term analysis of the transformations of EU gender equality. It analyses the mechanisms of construction, consolidation and deconstruction of this policy and questions the effects of its current dismantling.

Sophie Jacquot is a Marie Curie Fellow at ISPOLE (UCL, Belgium) and a researcher at CEE (Sciences Po, France).
She specializes in the sociology of policy analysis and in EU studies. Her research activities are concerned with the transformation of EU public policy and with the effects of Europeanization, especially in the fields of gender equality, social policy and anti-discrimination.

"Sophie Jacquot has written a remarkable book that will be read by students of the EU and European politics in general. She provides a dynamic account of the historical evolution of gender equality policy from its humble origins as Article 119 in the Rome Treaty to its central (mainstreamed) status in European policy making today. While she views the EU as a specialized laboratory within which to carry out her study, she is also attentive to the broader conceptual and methodological aspects of policy making, thus making her book cumulative with the research in the field of comparative politics." James A Caporaso, Professor of Political Science, University of Washington, USA

"This important book tells it like it is, neither under-estimating the heyday nor gilding the years of decline. Sophie Jacquot follows the story of the EU's policies and politics promoting gender equality, tracing their innovative beginnings, their zenith, and their slow but steady dismantling. This perceptive and empirically rich analysis is a must-read for practitioners and scholars alike." Jane Jenson, Chair in Citizenship and Governance, Political Science, Université de Montréal, Canada

"This book tells the fascinating story of the evolution and gradual mutation of gender equality policy in the European Union. By identifying causal temporal sequences, Sophie Jacquot tracks down the rise (and perhaps fall into the world of symbols) of gender equality policy, from exception to anti-discrimination and eventually a set of human rights. This research monograph provides profound lessons about the EU identity and the balance between norms, values and markets today." Claudio M. Radaelli, Director, Centre for European Governance, University of Exeter, UK