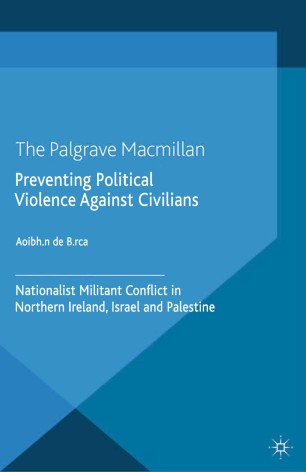 The increased targeting of civilians by militants raises serious and profound questions for policy-makers. Examining conflict in Northern Ireland, Israel and Palestine, this book focuses on ethno-nationalist militant groups and formulates a model to constrain violence against civilians.

Aoibhín de Búrca is Communications Manager for the Irish Humanities Alliance in the Royal Irish Academy's Policy and International Relations Department. She was an Ad Astra Research Scholar in University College Dublin where she received her PhD. She also lectured on Middle East Politics, the Irish Peace Process and International Conflict and Security in UCD and Dublin City University. Previous to academia she was a news and current affairs journalist for Irish national radio.

"De Búrca's striking and innovative text offers a nuanced analysis of political violence used to pursue ethno-nationalist aims. Her cases, Northern Ireland and Israel/Palestine, may be traditional but her conclusions offer an important road map to scholars, students and policy practitioners on the means by which such violence can be prevented and minimised and ultimately replaced by political action. De Búrca convincingly argues that generic and de-contextualised models for addressing political violence fail to capture the depth and complexity of the phenomenon. The model proposed, rooted in social movement theory, offers greater understanding of political violence as well as identifying practical policy tools to address it." - Ben Tonra, University College Dublin

"Aoibhín de Búrca's book provides a fresh analysis of an important question, why and when militant groups resort to violence against civilians. Understanding the dynamic of political violence, as the author argues, is essential to prevent its escalation. This insightful, original and detailed comparative study of Northern Ireland and Israel/Palestine is an important read for both scholars and policy makers." - Guy Ben-Porat, Ben Gurion University of the Negev and author of Between State and Synagogue: The Secularisation of Contemporary Israel