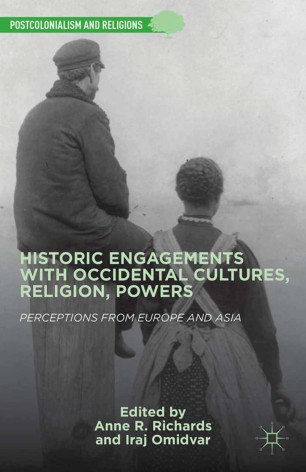 Part of the Postcolonialism and Religions book series (PCR)

This book explores centuries of power relations and imperial and civilizing rhetorics, overarching themes highlighted in these infrequently heard accounts by eastern travelers to the West. Considered in depth are evolutions in mental frameworks and practices that led to the emergence of anticolonial consciousness and strategies of protest.

"This book significantly contributes to our understanding of the history of colonial encounters and of East-West interactions by redirecting focus to the cultural and religious perspectives on the West recorded by visitors from Russia, Persia, the Ottoman court, Andalusia, Egypt, India, and China. These fascinating case studies provide a treasure house of insights into how imperial Europe and democratic America have, for centuries, appeared to visitors from eastern lands in surprising and sometimes startling ways." - Gerald MacLean, author of The Rise of Oriental Travel (2004) and Looking East (2007)

"Contributors to this collection do not settle for a reversal-of-the-imperial-gaze or an empire-strikes-back methodology. Rather, they offer a global cast of characters whose outsider status allowed for contrapuntal perspectives on Western technology, mores and cultural systems over the course of nine centuries. Above all, these men and women were material witnesses to Occidental practices who left an archive of critique that challenges easy conceptions of the Orient or Orientalism." - Antoinette Burton, Professor, University of Illinois, USA

"This timely study of incommensurable difference, sparked by an interest in the redemptive potential of transcultural relations, offers readers a refreshing historical glimpse at Occidentalism, and in the process restores to 'the Other' the needed agency to imagine that western readers have always taken as a source of pride. Highly recommended for college courses and for the general reader" - John C. Hawley, editor of Historicizing Christian Encounters with the Other (1998)

"The fascinating collection of essays in this volume provides a rich array of vantage points from which to consider how travelers to European and North American societies have historically responded to and imaginatively constructed a Western other. In their incisive analyses of little-known sources that reverse the dominant flow of Orientalist knowledge production, the contributors reveal the complex workings of the outward-looking gaze in the construction of modern cosmopolitan identities." - David Porter, University of Michigan, USA

"Edward Said proposes the need to see the Other (the Oriental) through the Other, but can we also see Us (the Occidental) through the very perspective of the Other? This is the question rightfully raised and discussed in Historic Engagements with Occidental Cultures, Religions, Powers, a truly insightful piece in post-colonial and cross-cultural studies among others." - Yong-Kang Wei, University of Texas at Brownsville, USA

"Historic Engagements with Occidental Cultures, Religions, Powers is a rich collection of essays that de-centers the traditional Orientalist framework by reclaiming the legitimacy of oriental actors and their discourses of the West as 'other.' This is a volume that promises to challenge our understanding of the limitations of colonialism even as it broadens our knowledge of the gaze of the subject. Informative and instructive, Richards and Omidvar have gathered together a significant group of scholars and leaders in the emerging field of Occidental Studies." - Sandra Trudgen Dawson, Northern Illinois University, USA

"This is a rich and eclectic collection that provides a fresh perspective on the idea and reality of the 'West' by drawing upon commentaries from both a deep historical past and an expansive geography." - Mrinalini Sinha, Alice Freeman Palmer Professor, History, University of Michigan, USA