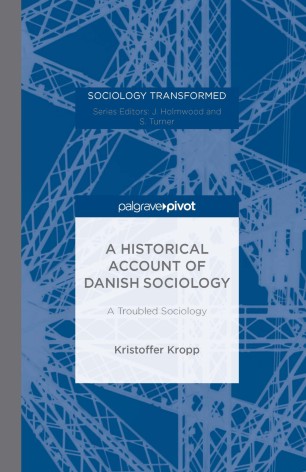 A Historical Account of Danish Sociology: A Troubled Sociology

This book provides the first English-language account of the history of Danish sociology, examining it from the late 19th century to the present day. Focusing on the discipline's struggle for recognition in Denmark, it is a case study of how sociological knowledge has entered into ever-changing coalitions with welfare state bureaucracies.

Kristoffer Kropp is Associate Professor at Roskilde University, Denmark. His research focuses on the history of sociology as well as on the production of social science knowledge and the relationship between social science, political institutions and the European integration process.

"Kristoffer Kropp's book is a signal contribution to the growing library of careful historical studies of national social science disciplines and sub-disciplinary specialisms. A must for sociologists, intellectual historians, specialists in science studies, and those interested in the historical uses of Pierre Bourdieu's field theory. This book tells a fascinating story about the stormy evolution of Danish Sociology and is a cautionary tale about the fragile conditions of social scientific creativity. Although the assault on the social sciences in Thatcherite Britain and Reaganite America during the 1980s is more familiar, Kristoffer Kropp reconstructs an even more dramatic case in Denmark that led to a 'near death' situation for Sociology in the 1990s. The author does not reduce the crises of Danish sociology to American influence, but his book shows the disproportionate impact of a handful of American sociologists on the balance of power in the sociological and wider scientific and academic spheres in Denmark. The book reconstructs the strategies, institutions, and research methods that emerged in response to disciplinary crisis, and traces sociologists' efforts to navigate the polarization between autonomous and applied social science." - George Steinmetz, University of Michigan, USA

"It's a shame but true: In the world of science small countries do not play a role. Therefore foreigners do not know anything at all about what's going on in these nations and their academia. Kristoffer Kropp offers a concise analysis of Danish sociology, points to the connection between the welfare state and the fate of sociology and tells the story about the ups and downs of Danish sociologists." - Christian Fleck, University of Graz, Austria