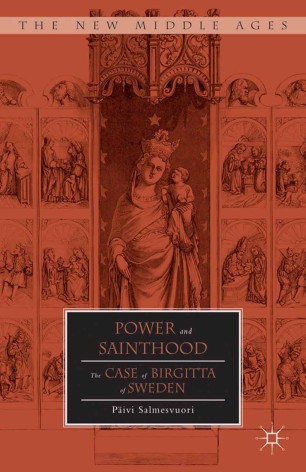 The Case of Birgitta of Sweden

Analyzing the renowned Saint Birgitta of Sweden from the perspectives of power, authority, and gender, this probing study investigates how Birgitta went about establishing her influence during the first ten years of her career as a living saint, in 1340–1349.

Päivi Salmesvuori, ThD, is Adjunct Professor in the General Church History and Gender Studies at Church History at the Faculty of Theology in the University of Helsinki, Finland. She has specialized in issues pertaining on gender, power, and religion. Her next book Power and Sainthood: Birgitta of Sweden and her Revelations will be published by Palgrave Macmillan.

"Focused and meticulously researched, Power and Sainthood addresses the idea of holiness in action as St. Birgitta began to assert her authority in the formative years of her life as a mystic and visionary. Salmesvuori gives a grounded view of what Birgitta was like as both a woman and human being, but - very wisely - stops short of making any generalized character judgments . . . A truly interesting take on Birgitta." - Bridget Morris, Independent Scholar, York, UK

"Salmesvuori succeeds in showing how this remarkable woman from the northern fringe of Europe was able to establish a personal authority that made princes, priests, and popes listen to her. After reading this book, few will be inclined anymore to say that Birgitta was guided by her father confessors. It was clearly the other way around." - Stephan Borgehammar, Professor of Practical Theology, Lund University, Sweden

"Salmesvuori offers fresh insights into how Birgitta established her reputation as a living saint in mid-fourteenth century Sweden. Carefully attending to historical chronology, Salmesvuori provides new interpretations of Birgitta's early revelations in light of key theories about the public performance of religious power. She cogently demonstrates that Birgitta exercised spiritual authority through repeated negotiations with her audience and attracted followers even earlier than scholars usually recognize. This study is a valuable contribution to our understanding of gender, power, and sanctity in the later Middle Ages." - Claire L. Sahlin, Professor of Women's Studies, Texas Woman's University, USA