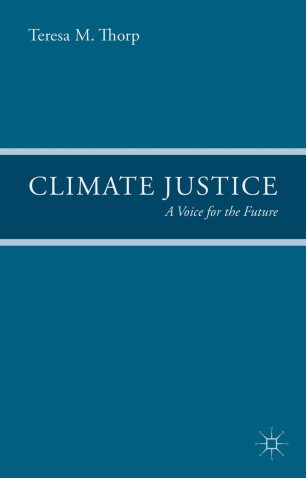 A Voice for the Future

In this ground-breaking work, Teresa Thorp tackles the causes and effects of climate injustice by methodically mapping out an approach by which to reach a negotiated
consensus with legal force to protect present and future generations. Using the law and policy of climate change as a vehicle for illustrating how to shape our future,
she comprehensively overturns the widely held contemporary view of climate justice as inconstant charitable acts, relative systemic notions and static concepts isolated
from the common good and a congruent rule of law. Responding to the adverse impacts of climate change (heat waves, extended drought, severe flooding and
desertification), which represent an urgent and potentially irreversible threat to human societies and the planet, requires a new and cohesive way of thinking about
global policy and the law.
The mission of guaranteeing and realising human dignity, human security and human rights is multi-fold. Looking through the lens of kaleidoscopic normativity, an
extensible language anchored in common juridical elements should facilitate how norms enter the socio-legal frame and interact within it. Users need to be able to
display and interpret the congruent legal norm in order to obey and apply it. Galvanising this process by constitutionalising first principles and consequential norms
is vital for attaining fraternity between nations and among all people.
Climate Justice – A Voice for the Future is an essential read for scholars, practitioners and all those genuinely interested in reaching consensus on a post-2015 global climate accord, a unified development agenda and a cohesive pact for disaster-risk reduction.