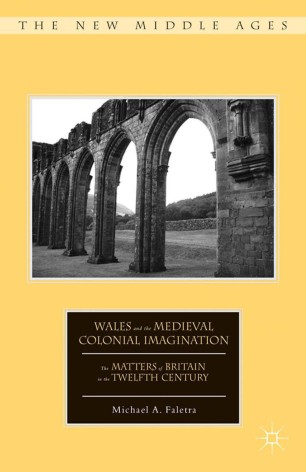 Wales and the Medieval Colonial Imagination

The Matters of Britain in the Twelfth Century

Focusing on works by some of the major literary figures of the period, Faletra argues that the legendary history of Britain that flourished in medieval chronicles and Arthurian romances traces its origins to twelfth-century Anglo-Norman colonial interest in Wales and the Welsh.

Michael A. Faletra is an Associate Professor of English and Humanities at Reed College, USA.

“This is a valuable study, particularly due to Faletra’s own synthesis of postcolonial theorists with old-school literary criticism and post-Conquest Insular history. … Fale­tra has produced a timely, well-written, and thoughtful study. His is not only one of the most recent postcolonial readings of Anglo-Norman literature, it is also one of the more successful. … Wales and the Medieval Colonial Imagination will appeal to students of twelfth-century Arthurian literature, post-Conquest Insular literature and history, and medieval notions of the nation.” (K. S. Whetter, Journal of English and Germanic Philology, Vol. 116 (3), July, 2017)

"An eminently useful book and one that should be explored in all its complexity by anyone interested in the authors, postcolonial studies of the middle ages, or British literary culture in the twelfth century." - The Medieval Review