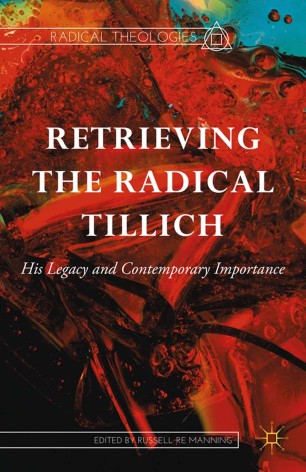 His Legacy and Contemporary Importance

Paul Tillich is best known today as a theologian of mediation. Many have come to view him as an out-of-date thinker a safe exemplar of a mid-twentieth-century theological liberalism. The way he has come to be viewed contrasts sharply with the current theological landscape one dominated by the notion of radicality. In this collection, Russell Re Manning breaks with the widespread opinion of Tillich as 'safe' and dated. Retrieving the Radical Tillich depicts the thinker as a radical theologian, strongly marked but never fully determined by the urgent critical demands of his time. From the crisis of a German cultural and religious life after the First World War, to the new realities of religious pluralism, Tillich's theological responses were always profoundly ambivalent, impure and disruptive, asserts Re Manning. The Tillich that is outlined and analyzed by this collection is never merely correlative. Far from the dominant image of the theologian as a liberal accommodationist, Re Manning reintroduces the troubled and troubling figure of the radical Tillich.