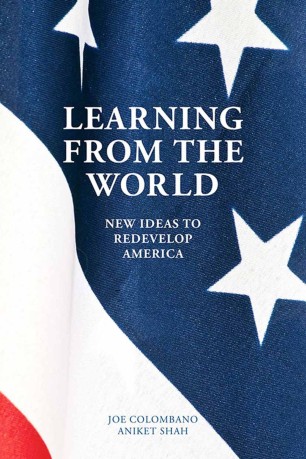 Learning from the World

In this far-ranging and provocative volume, Joe Colombano and Aniket Shah provide global perspectives on the most significant challenges facing modern America, seeking to inspire new ideas to redevelop America.

"At a time when political systems everywhere, not least in the United States, seem to be running out of solutions for many complex problems faced by societies, it is refreshing to read this book where a valuable inventory of experiences and proposals are provided in prose that, without sacrificing intellectual rigor, can be enjoyed by both the specialist and the general public." Ernesto Zedillo, Director, Yale Center for the Study of Globalization, USA and former President of Mexico

"This book is a tour de force of ideas for global reinvention. The authors draw on the vast experience of hands-on reformers from around the world and present readers with a dazzling array of options for making real change." Howard Dean, former Governor of Vermont and former Chairman of the Democratic National Committee

"This important book recognizes that the US is experiencing accelerating relative economic, political and military decline. Rather than appealing to vacuous American exceptionalism, it offers a workable alternative based both on America's strengths and on the best the rest of the world has to offer. Pondering the many constructive and politically feasible proposals for collective action in this volume, I experienced a sense of optimism and confidence that this nation can once again become a 'beacon on a hill' for the world. Not in the triumphalist sense, but as a shining example born out of failure, trial and error and the willingness to be open to the best the rest of the world has to offer a melting pot that enhances what it absorbs, with both pride and humility." Willem Buiter, Chief Economist of the European Bank for Reconstruction and Development (2000-2005), Member of the Monetary Policy Committee, Bank of England (1997-2000)

"Learning from the World highlights an under-recognised opportunity for American policymakers to draw insight from other countries that are facing, or have faced, similar challenges. Through a varied and thought-provoking set of essays and case studies, editors Aniket Shah and Joe Colombano draw out a number of very actionable lessons for the United States from both developed and developing countries around the world." Dominic Barton, Global Managing Director at McKinsey & Company

"America is more used to being judged by its own standards than clinically compared to other countries and their standards of competitive excellence. The results are revealing." Mark Malloch Brown, Regional Chairman, FTI Consulting, UK, and former Deputy Secretary-General of the United Nations

"The volume Learning from the World is an exceptional collection of essays that provides insightful solutions to the problems facing America. But it is not only America that can benefit from the experiences culled from a diverse group of countries across the globe. I highly recommend this volume to anyone desiring to secure sustainable growth and development for their countries and for the entire world." Changyong Rhee, Chief Economist, Asian Development Bank

"The global economy has become more complex than ever before, with more countries facing the central question of how to remain competitive in a converging world. New perspectives are needed to deal with these challenges. Nowhere is this more relevant than the United States. This is a bold, refreshing and creative volume that will help policy-makers and student be better equipped for the 21st century." Ricardo Hausmann, Director of Harvard's Center for International Development and Professor of the Practice of Economic Development, Harvard University, USA