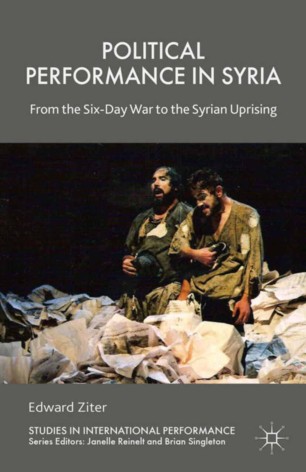 From the Six-Day War to the Syrian Uprising

Part of the Studies in International Performance book series (STUDINPERF)

Political Performance in Syria, charts the history of a theatre that has sought the expansion of civil society and imagined alternate political realities. In doing so, the manuscript situates the current use of performance and theatre by artists of the Syrian Revolution within a long history of political contestation.

Edward Ziter is Associate Professor of Theatre History and Chair of the Department of Drama at the Tisch School of the Arts, New York University, USA. He is author of The Orient on the Victorian Stage and articles in Theatre Research International, TDR, Theatre Journal, Theatre Survey, The Wordsworth Circle, and numerous anthologies.

“Ziter has done a service to students and scholars of theatre who would like to know more about the stories they see on the news and the relationship of art to the civil war. Though this is only one frame through which to view the range of performance traditions in Syria, it is a timely one and one that deserves attention.” (George Potter, Theatre Survey, Vol. 57 (2), May, 2016)

“The book adequately documents performed passages that will be very familiar to those who grew up watching the collaborations of al-Maghut and Duraid Lahham. The book is clearly intended almost exclusively for the non-Arab theater artist or scholar. … This book will serve as an excellent introduction for theater scholars, particularly those seeking a working model for researching and writing about Arab culture.” (Samer Al-Saber, SCTIW Review, sctiw.org, February, 2016)

“Edward Ziter’s Political Performance in Syria is a well-researched and remarkable book, tracing terror and performance across forty years under the Assad regimes. The book’s intense and provocative configuration of performance is haunted by an overwhelming desire to account for a comparative study of performances across national, cultural, social, and political borders … . Ziter’s insightful book spawns some of the best scholarship on Syrian political theatre and is a valuable contribution to the fields of politics and performance.” (Mohamed El Mejdki, Theatre Journal, Vol. 67 (4), December, 2015)