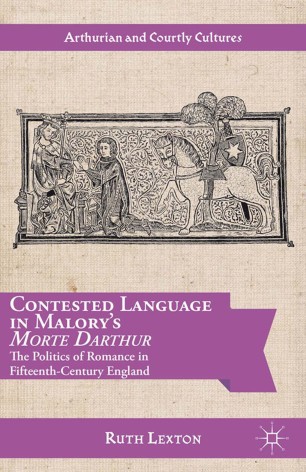 The Politics of Romance in Fifteenth-Century England

Part of the Arthurian and Courtly Cultures book series (SACC)

Examining Malory's political language, this study offers a revisionary view of Arthur's kingship in the Morte Darthur and the role of the Round Table fellowship. Considering a range of historical and political sources, Lexton suggests that Malory used a specific lexicon to engage with contemporary problems of kingship and rule.

"Rarely do we have a chance to view a late medieval or early renaissance text from a totally new perspective, but Lexton overthrows all of our nostalgic assumptions about what King Arthur and his roundtable must have meant to Malory's original audience. This book argues instead that Arthur (and through him, the reigning powers in England) are criticized. Key to this argument is Malory's use of loaded political language, terms such as justice, 'comyns,' counsel, rule, worship, courtesy, fellowship, and treason. This carefully argued and nuanced study of language provides happy proof that new and important work is still possible in much-studied texts." - Kathryn Hume, Edwin Erle Sparks Professor of English, The Pennsylvania State University, USA

"Indispensable for Arthurian scholars, Contested Language in Malory's Morte Darthur argues that Malory's use of specific political language highlights the trouble with the system of governance in the Morte - especially at the level of the king. Lexton crafts this argument with keen attention to the political and social environment surrounding the writing and reading of the text. The deft comparison of Malory's language to the words and ideas in political and personal documents from the period helps elucidate Malory's accomplishments and possible goals in his version of the Arthurian story." - Molly Martin, Associate Professor of English and Foreign Languages, McNeese State University, USA

"Contested Language in Malory's Morte Darthur uses an impressive mastery of fifteenth-century texts to make the bold argument that Le Morte Darthur treats Arthur not as an ideal king but as a model of political failure. Exquisitely sensitive to language, this book tracks key terms through texts ranging from law books to letters, from disquisitions on kingship to the managing of servants. The result goes beyond a reading of Malory to be an insightful analysis of fifteenth-century political discourses." - Kenneth Hodges, Associate Professor of English, University of Oklahoma, USA