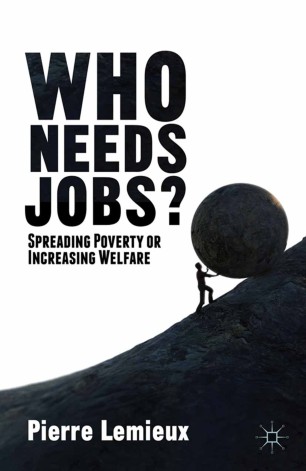 In Who Needs Jobs?, Lemieux explains how jobs are not the goal of economic life and how creating jobs should not be the goal of public policy. He delves into how income and prosperity are created (businesses producing what consumers demand), proposes solutions to the unemployment problem, and provides readers with the knowledge to navigate the jobs discussions of politicians and economists in America. With his approach, Lemieux takes this controversial and complex topic and makes it understandable, using economic analysis and real world examples.

Pierre Lemieux is an economist affiliated with the Department of Management Sciences of the Universite du Quebec en Outaouais, Canada, a Senior Fellow at the Montreal Economic Institute, and a Research Fellow at The Independent Institute (Oakland, California). He is author of several books, as well as several newspaper and journal articles.

"Pierre Lemieux once again debunks one of the most pervasive delusions driving government economic policy. His lucid writing and vivid examples show why federal programs that seek to create jobs are almost guaranteed to breed boondoggles and undermine productivity throughout the economy. Unfortunately, politicians profit from such schemes no matter how much taxpayers suffer." - Jim Bovard, author of Attention Deficit Democracy (2006) and Lost Rights: The Destruction of American Liberty (1994)

"When government regulations create more jobs, is that good? Economists say no. Economist Pierre Lemieux also says no, but beautifully explains why. In one anecdote, he tells us how the chainsaw destroyed logging jobs and made Americans much better off. One of his most powerful messages is that workers' living standards improve when technology destroys jobs. Read, enjoy, and learn." - David R. Henderson, Research Fellow, Hoover Institution, USA