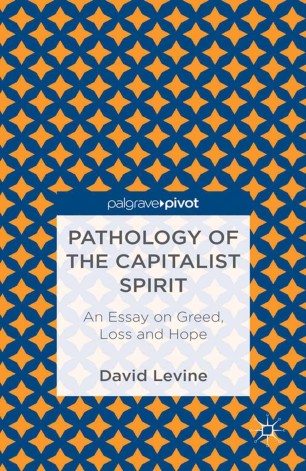 Pathology of the Capitalist Spirit: An Essay on Greed, Hope, and Loss

Pathology of the Capitalist Spirit is about capital and about the economic system that bears its name. In this book, Levine argues that our pursuit of ever-more wealth in the form of capital expresses our dissatisfaction with the world we live in, with what we have and what we don't have. Capital embodies our hope for something different. Because capital embodies this hope, it has become desire's object. In his study of capitalism, Levine explores the meaning of capital as a social reality connected to fundamental human aspirations. The link between capital and the pursuit of a hoped-for state is especially important in light of the stubborn insistence on the part of its critics that capitalism exists to serve the material interests of those whose vocation is to own capital. This misunderstanding ignores what is essential about capital, which is its link not to interests but to hope, especially the hope that by accumulating capital the individual can achieve an attachment to the good. It is this hope that blocks tolerance of any notion that there is something unfair in the capitalist's acquisition of wealth and that fairness can be achieved through its redistribution to others. It is also this hope that animates the capitalist system as a whole. And in that sense, this hope is the spirit of capitalism. To develop this theme, Levine calls on the ideas and writings of major theorists involved with understanding modernity and capitalism: Adam Smith, Karl Marx, Max Weber, Emile Durkheim, and Joseph Schumpeter.